The typical British summer weather played a vital role in how the Queen’s passing will be remembered. As viewers nervously watched the news coverage throughout the afternoon on Thursday, it quickly became apparent that the weather at Balmoral was reflecting the mood of the nation.

With cameras focused on the large gates at the main entrance to Balmoral, news readers and guards at the estate could be seen battling the elements as rain almost continually hammered down.

The darkened sky and continual rain mimicked the sense of sadness and concern felt across the nation as people awaited news about the Queen’s health.

Twitter user @nataliefoskett said: “All this rain is the nation’s tears for our beloved Queen Elizabeth II.”

@migueldante added a video of the gates closing at Balmoral following the announcement of the Queen’s death. 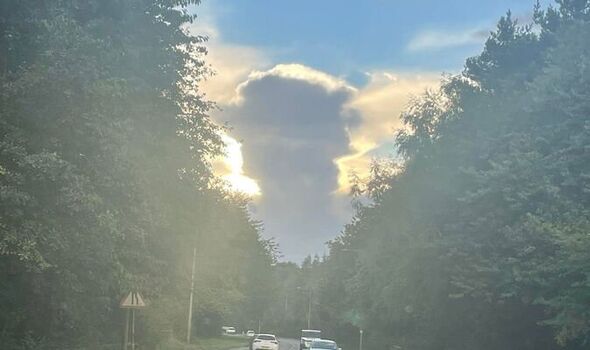 The caption read: “This sombre shot of the gates of Balmoral Castle in Scotland slowly closing in the rain after the announcement of the death of Queen Elizabeth II is perfectly poignant.”

Despite the heavens opening throughout the day up to the point of the announcement, in London and other areas of the UK, people took solace in the appearance of two new features in the sky.

People who had gathered at Buckingham Palace tweeted pictures of a double rainbow over the Palace with similar images also emerging from Windsor Castle.

Twitter user @terri555769 said: “That rainbow was so beautiful. God was watching and waiting for a perfect sign to the people of the UK, the Queen is in His hands now!

Alongside the double rainbow, another royal fan posted to Facebook a cloud formation spotted by her daughter following the Queen’s passing.

“I panicked…then she pointed this image out in the clouds. The Queen.”

The picture shows a cloud formation with the sun directly behind it over the road the pair were driving on.

The clouds look like the outline of the Queen’s signature hairstyle, and what could be seen as her neck and shoulders looking towards the sun.

The weather throughout the historic day of the Queen’s passing seemed to mimic the feeling of the nation and bring solace to many searching for a bigger sign to match the significance of the loss of Her Majesty.