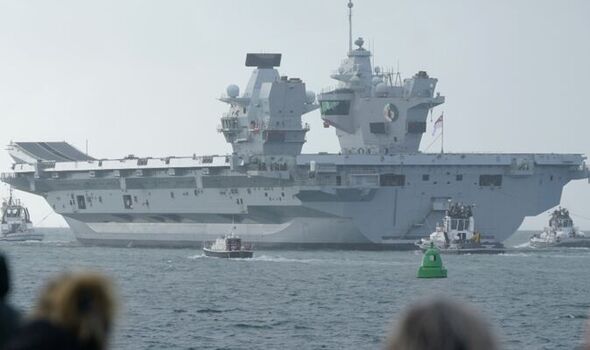 The Royal Navy has rolled out new supersonic missiles after the new weapons exceeded expectations during trials. The missiles are intended to protect the fleet’s aircraft carriers.

Wildcat helicopters alongside RFA Argus took part in the final trials of the Martlet and Sea Venom missiles.

Both weapons come under the Future Anti-Surface Guided Weapon banner, with the Martlet designed to take out small boats while the Sea Venom possesses ten-times the strength and aimed at punching through armoured warships.

About 30 people, including air crew, scientists, test pilots and technicians from across the Navy, industry and Ministry of Defence, were involved in the trials which took place in the Atlantic and Mediterranean.

Wildcats from 815 Naval Air Squadron landed and took off more than 900 times during the trials in varying conditions and carrying different payloads.

RFA Argus sailed over 8,000 miles in the Atlantic and then into the Mediterranean so the trials could take place in a range of different weather conditions, according to news website The News.

Meanwhile, the Royal Navy announced today (October 11) that HMS Forth has joined dozens of ships and aircraft from a number of countries in Brazil for the longest-running at-sea exercise.

Sailors on the British patrol ship sailed into Rio de Janeiro for Exercise Unitas, which is in its 63rd year.

The exercise coincides with the 200th year of the Brazilian Navy and was hosted by the South American country.

READ ABOUT A ‘BRUTAL’ SEAGULL KILLER BEING JAILED

Forth was among 20 ships, more than 20 aircraft and two submarines from 16 nations, including the United States, Spain, Uruguay, France and Chile.

Operations Officer Lieutenant William Morris said: “The exercise was a valuable opportunity for Forth’s Warfare Department to exercise in ways they never usually would – everyone from AB to Officer learned an enormous amount from operating with a multinational task group, and Forth stands ready to conduct future exercises to a similar high standard.”

It comes as Frigate HMS Lancaster and minehunter HMS Hurworth tested the use of uncrewed tech, including drones and underwater survey vessels, which could be used by NATO on the frontline of future operations.

For the month-long trials, more than 11 warships, 120 autonomous vehicles and 1,500 military and civilian personnel from 15 NATO countries have taken over waters near the Troia Peninsula, Portugal.

It is the first time the Royal Navy ships has sent ships for the exercise with participation previously involving crewless boats and drones.