Home » Europe » Royal POLL: Should Edward and Sophie have a place in slimmed-down monarchy?

Daily Express royal editor Richard Palmer claimed on the latest episode of the Daily Express’ Royal Round-Up that Edward and Sophie’s roles in the Firm could be compromised. He told host Pandora Forsyth: “The other big question mark is over Edward and Sophie. Many people had assumed that they would have a role.”

He claimed that, according to a royal source, there was an assumption that non-working members of the Royal Family would have “no role” under King Charles.

Prince Charles reportedly has plans to “slim down” the Royal Family when he takes the throne.

Royal expert Jonathan Sacerdoti told US Weekly earlier this year that Charles would likely make changes within the Firm.

He said: “It’s always been rumoured that he wants to slim down the working royals at the core of the family.” 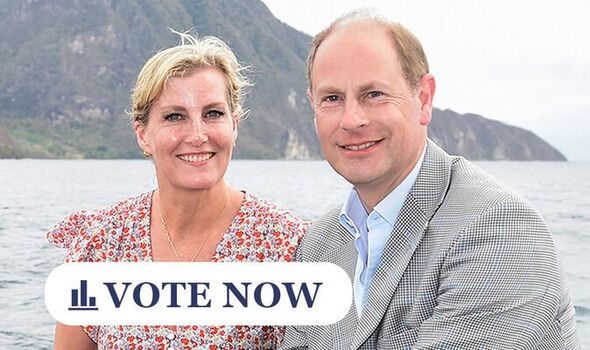 Edward is the Queen’s youngest son and currently 14th in line to the throne.

Mr Palmer explained: “When they got married, it was made clear that the Queen’s intention was for Edward to inherit the title of Duke of Edinburgh, after his father’s death.”

Prince Philip died on April 9, 2021, but the title has not been passed on to Edward.

Mr Palmer said:  “That title has gone back to the Crown, I think”.

He added: “It is, by no means, certain what’s going to happen.”

Edward and Sophie have both stepped up, taking on additional engagements to support the Queen, whose episodic mobility issues have forced her to miss several events in recent months.

Sophie has also reportedly earned the title of the Queen’s “favourite”.

As part of the Platinum Jubilee festivities, the couple conducted engagements in Northern Ireland.

They also embarked on a tour of the Caribbean in May, visiting Saint Lucia, Saint Vincent and the Grenadines, and Antigua and Barbuda.

Most recently, Edward and Sophie were seen attending events at the 2022 Commonwealth Games in Birmingham alongside their children.

So what do YOU think? Should Edward and Sophie have a place in a slimmed-down monarchy? Vote in our poll and leave your thoughts in the comment section below.