Another royal couple have followed in Princess Beatrice’s footsteps and gone ahead with wedding plans despite the pandemic. On Thursday King Jigme Khesar of Bhutan shared official photos from the royal wedding of his half-sister Princess Eeuphelma Choden Wangchuck of Bhutan, 27.

Two photos from the special day were shared by the proud king on his official Instagram account.

His Majesty marked the special milestone with a heartfelt post. 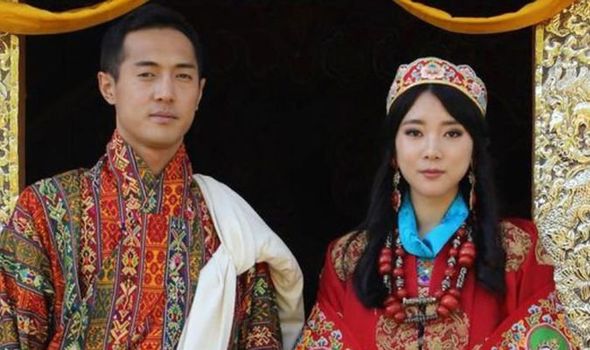 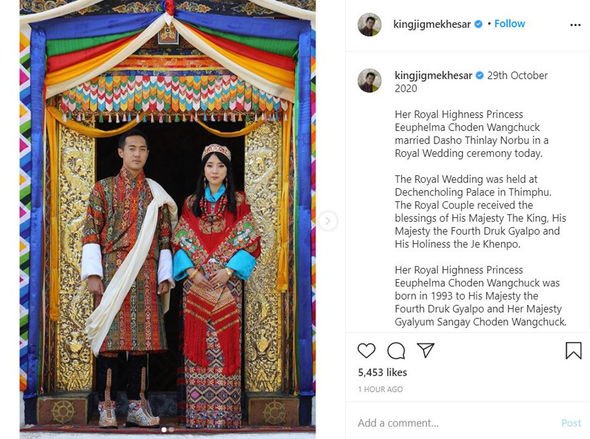 The king added: “The Royal Wedding was held at Dechencholing Palace in Thimphu. The Royal Couple received the blessings of His Majesty The King, His Majesty the Fourth Druk Gyalpo and His Holiness the Je Khenpo.

“Her Royal Highness graduated with a major in Sociology from Georgetown University in the United States in 2016.

“As President of the Bhutan Paralympic Committee, Her Royal Highness represents Bhutan internationally to take forward the participation of Bhutanese athletes with disabilities in various global sporting events.” 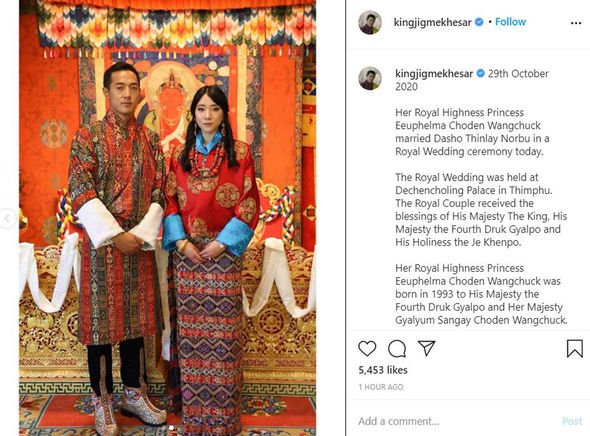 In reference to the groom, he wrote: “Dasho Thinlay Norbu was born to Yab Dhondup Gyaltshen and Yum Sonam Choki in 1992, and is the younger brother of Her Majesty The Gyaltsuen.

“After graduating from St. Stephen’s college in Delhi University, Dasho trained as a pilot and has been flying for the National Airline Drukair since 2019.

“The Royal Couple are both active DeSuups.”

His Majesty The Druk Gyalpo Jigme Khesar Namgyel Wangchuck is the Fifth and Reigning King of Bhutan.

He became king after his father Jigme Singye Wangchuck abdicated the throne in his favour on December 9 2006.

A public coronation ceremony was held on November 1, 2008, a year that marked 100 years of monarchy in Bhutan.

Princess Eeuphelma is the daughter of the fourth King of Bhutan Jigme Singye Wangchuck and his wife, Queen Mother Ashi Sangay Choden Wangchuck.

This makes her the half-sister of the fifth King, Jigme Khesar Namgyel Wangchuck. 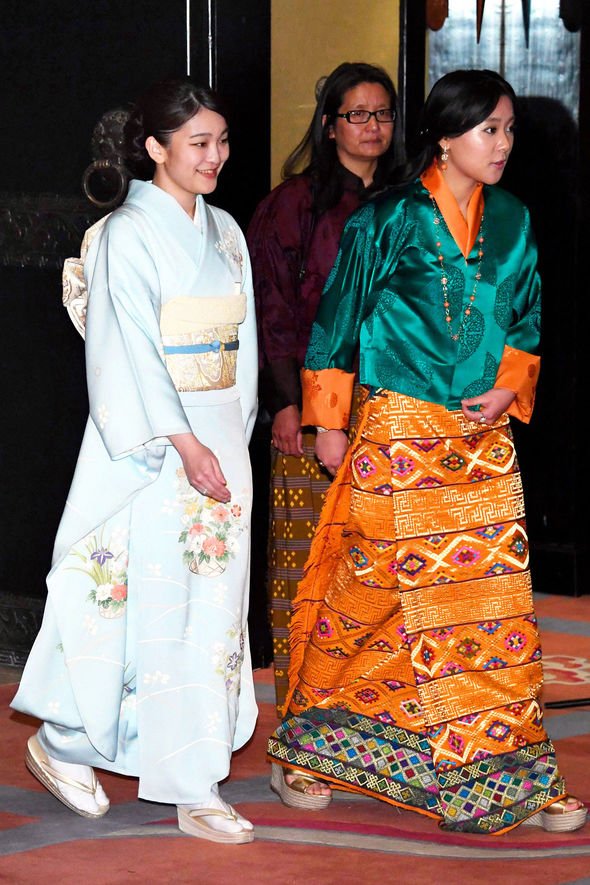 Princess Beatrice seemed to set the trend for pandemic royal weddings back in July.

After Bea and Edoardo had to call off their May wedding amid lockdown they rearranged the special day to take place in secret in July.

The low key ceremony was attended by just 30 guests and was only made public after it had taken place.

While not many photos of Bea’s big day were shared with the public her wedding dress was an instant hit with fans.

Bea decided to borrow a gown from her grandmother the Queen for the occasion in a clever move that delighted fashion fans everywhere.

The 1970s Sir Norman Hartnell dress was restyled especially to suit Beatrice and has since gone on display at Windsor Castle.