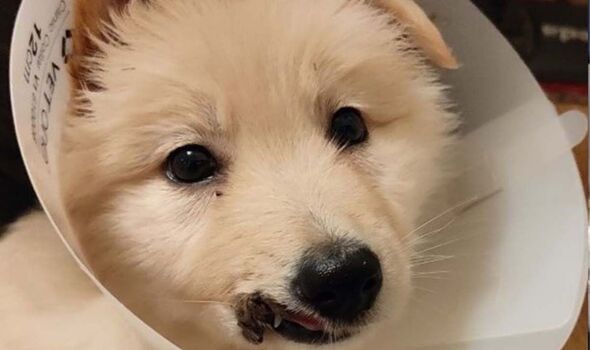 Vets have battled to save two seriously injured puppies found dumped and left for dead.

The three-month-old cream German shepherd cross puppies were found abandoned at the end of November.

One puppy, named Poppy, was discovered with a bitten-off nose, reports LeicestershireLive. The second, who has been named Freya, had a bitten-off tail and an open wound on her mouth.

An RSPCA inspector collected the puppies and took them to a veterinary surgery. Their injuries were so severe that it looked likely that they would need to be put to sleep. The puppies were then brought into RSPCA Woodside in Leicester, where three separate vets examined them.

Poppy’s nose had healed irregularly before she was abandoned which meant she could not breathe out of her nose. Surgery was not possible and this also meant she was no longer able to eat and drink.

With reconstructive surgery not being an option, she sadly had to be put to sleep due to how her old injury had healed – leaving staff devastated. The RSPCA says she could have been saved if her owner had taken her to a veterinary surgery before her nose had healed over.

Freya’s mouth and tail have since been treated by a veterinary team and she is now in a foster home with a family who adore her. An online fundraising page has now been launched to help pay for her long-term care.

RSPCA Woodside’s Branch Manager Amanda Lovett says “RSPCA Woodside is seeing more and more incidents like this. It is likely the puppies were kept in cramped conditions with their mum by an indiscriminate breeder.

“Mum probably had nowhere to escape a litter of up to eight puppies so bit her puppies through stress. Indiscriminate breeders would not be able to sell the puppies as they were injured so abandoning them was the easiest option.

“Unfortunately, we are seeing a significant rise in the abandonment of sick and injured puppies and kittens. This is probably the result of people buying pets on a whim during the pandemic, the cost-of-living crisis, and the high cost of veterinary care.”

The puppies were found abandoned in Dudley on November 29. Anyone with information is asked to call the RSPCA cruelty line on 0300 1234 999 or email [email protected]