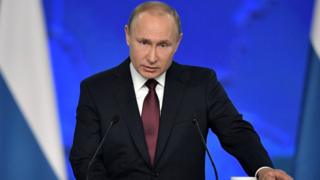 Russia’s parliament has passed two bills outlawing “disrespect” of authorities and the spreading of what the government deems to be “fake news”.

The first ban refers to “blatant disrespect” of the state, its officials and Russian society, and repeat offenders face up to 15 days in jail.

President Vladimir Putin is expected to sign the bills into law once they have received approval from Russia’s upper house, the Federation Council. The body will consider both bills on 13 March.

What’s been the reaction?

Journalists, human rights campaigners and even government ministers have voiced their opposition. Nikolai Svanidze, a journalist and member of Russia’s Civic Chamber, said the “barbaric” legislation would “make journalists fearful of speaking and writing”.

But lawmakers for the governing United Russia party, whose members proposed the bills, defended the legislation.

If you believe the pro-Kremlin MPs behind this legislation, tackling fake news and online insults benefits the Russian people and the state. But the headline in today’s edition of the newspaper Vedomosti tells a different story: “Fake concern about society”, declared its front page.

Critics of the legislation believe the draft laws are part of a growing Kremlin-inspired crackdown on Internet freedom.

They point to another bill under debate to create a “Sovereign Internet”. Under the plan, Russian cyber space could operate independently of the world wide web. Many see this as Russia’s version of the Great Firewall of China: an Internet Iron Curtain.

As for the draft law on disrespect, earlier this week popular tabloid Moskovsky Komsomolets summed up concern in a stark cartoon. It depicted a police officer talking to a man who is brandishing an axe, with bodies lying all around.

Pointing to the weapon, the policeman says: “Don’t worry about that. Just make sure you don’t write anything bad online about the authorities.”

What are the punishments?

Sanctions for publishing so-called fake news will vary. Individuals, officials and businesses will face fines of 300,000, 600,000 or 1 million roubles respectively if the spread information affects “functioning of critical infrastructure” like transport or communications.

Any online article containing “blatant disrespect” for the government or “public morality” will have to be deleted within 24 hours.

Traditional media registered with the Justice Ministry will face fines under the fake news bill, while originally they had been threatened with losing their licenses.

News sites without a licence could be blocked without warning by the state media regulator.