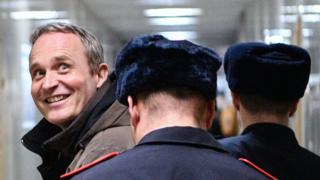 A Danish citizen living in Russia has been sentenced to six years in prison for practising as a Jehovah’s Witness.

The religious organisation was declared an “extremist” group by Russia’s courts in 2017 and outlawed.

Dennis Christensen was arrested in the city of Oryol nearly two years ago after police stormed a prayer service.

Denmark’s Foreign Minister Anders Samuelsen said he was “deeply concerned” and called on Russia “to respect freedom of religion”.

He said Denmark stood ready to help with Christensen’s appeal.

It is the first prosecution of its kind since the religious group was banned.

A judge at the district court said the six years in a penal colony was a “minimal sentence”, local news site Oryol Novosti reported.

Christensen’s sentencing comes despite an apparent intervention by Russian President Vladimir Putin in December, who called the allegations of extremism “utter nonsense” and promised to look into the prosecution of members.

Speaking to the BBC, Mr Putin’s spokesman argued there must have been “some reason” for prosecuting Christensen other than simply practicing his faith.

In court, however, prosecutors argued that he was actively involved as an organiser of religious activity for the banned group.

Christensen’s prosecution has attracted the support of human rights groups including Amnesty International, who said he had been imprisoned “simply for the exercise of his human rights including his right to freedom of religion”.

It called for his immediate and unconditional release.

Dozens of other Jehovah’s Witnesses are facing criminal charges in Russia, where the group has an estimated 170,000 members.

The movement is a Christian-based religious group which was founded in the United States in the late 1800s. It is best known by non-member for its door-to-door evangelical work in an attempt to recruit new members.

The organisation largely interprets the Bible literally, and rejects many of the teachings of other large Christian churches. In turn, they are not seen by traditional churches as a mainstream denomination.

In the Soviet Union under Stalin, Jehovah’s Witnesses were persecuted for their faith, facing arrests and deportation.

Freedom of religion is guaranteed under Russia’s modern constitution – but exceptions exist under extremism laws.

“We deeply regret the conviction of Dennis Christensen- an innocent man who did not commit any real crime,” a spokesman for the Jehovah’s Witnesses in Russia told AFP news agency.

“It is sad that reading the Bible, preaching, and living a moral way of life is again a criminal offence in Russia.”

Kate Middleton children: Are the Cambridge children going to be bridal attendants again?