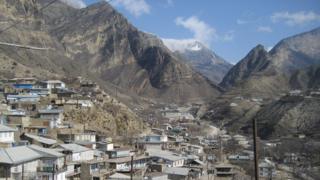 A report on female genital mutilation (FGM) in the North Caucasus has sparked a fierce debate in Russia, with some clerics defending the practice.

A civil society group found FGM to be common among Muslims in mountain villages in Dagestan. Girls’ genitals were cut in primitive homes.

But a senior Orthodox Christian priest, Vsevolod Chaplin, had backed him.

In a Facebook post (in Russian), Archpriest Chaplin expressed “my sympathies for the mufti, and I hope he doesn’t retreat from his position because of the howls and hysterics which will start now”.

“We Orthodox Christians have different traditions – but that never stopped us respecting the traditions of neighbouring peoples,” he wrote.

He said FGM was not necessary for Orthodox Christian women “because they’re not promiscuous anyway”. But he approved of the mufti’s statement that God had created “woman so that she could give birth and bring up children”.

Mr Berdiyev, the mufti of the North Caucasus, had said earlier that FGM was practised in some villages in Dagestan and that it was necessary to curb women’s sexuality.

“It would be very good if this were applied to all women,” the Islamic cleric said, adding, “It doesn’t stop women giving birth and there would be less debauchery.”

Speaking later to Russian media, he said his “joke” had been “twisted” by journalists to make it look like he advocated FGM.

Some Facebook users lambasted the priest’s position on FGM. Arik Elman said “you don’t have to sympathise with Islam in order to know that FGM is not a commonly accepted part of Muslim tradition, but has regional, tribal roots”.

Igor Tetyuev said it was “not the role of a celibate monk” to “discuss women’s bodies, childbirth and children”.

Irina Gubernatorova said “burning heretics at the stake and drowning witches in sacks were also ancient and glorious Christian traditions – shall we go back to them?”

In its report (in Russian), the Russian Justice Initiative (RJI) said it had interviewed many women in Dagestan and discovered that FGM was widespread in mountain villages.

The mutilation – condemned by the United Nations as “child abuse” – was usually carried out in primitive conditions, without anaesthetic, on infant girls aged up to three.

Women quoted anonymously in the RJI report said they considered FGM to be a Muslim duty for their daughters.

Usually it involved removal, or part-removal, of the clitoris and/or labia. But the most extreme form of FGM – sewing up the vagina to leave a tiny hole – was not done.

RJI said the subject was taboo in the mainly Muslim republic, home to many different ethnic groups, the largest of which are the Avars. FGM was largely ignored by Muslim community leaders, RJI said.

He said there was no clear Muslim instruction about FGM and no evidence that it “tames desire”.

More than 200 million women and girls around the world have undergone FGM. The UN estimates a further three million are at risk of being mutilated.

FGM has been documented in 30 countries, mainly in Africa, but also in the Middle East and Asia.

Meghan and Harry working on ‘severing all ties’ with Royal Family