A peer-reviewed article in The Lancet, the British medical journal, showed the Russian vaccine is 91.6 percent effective against mild Covid-19 and completely protective against severe disease. 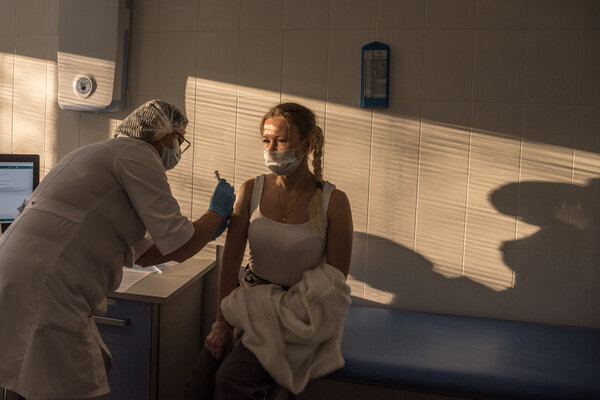 MOSCOW — Russia cleared a hurdle in its vaccine rollout on Monday with the publication in the respected British medical journal The Lancet of late-stage trial results showing that the country’s Sputnik V vaccine is safe and highly effective.

The publication is sure to buoy the Russian government’s promotion of the vaccine at home and around the world, strengthening the Kremlin’s hand in vaccine diplomacy with a credible endorsement of the product’s safety.

Russia drew criticism from Western experts when it approved the vaccine for emergency use in August — before late-stage trials had even begun — and started vaccinations that month.

Moscow claimed victory in the vaccine race, as it had decades earlier in the space race with the launch of the Sputnik satellite, though at the time other vaccines were further along in testing. In the end, its politicized rollout only served to deepen skepticism.

The peer-reviewed article published Tuesday cleared those doubts. It showed the vaccine had an impressive efficacy rate of 91.6 percent against the virus, and was completely protective against severe forms of Covid-19.

“The development of the Sputnik V vaccine has been criticized for unseemly haste, corner cutting, and an absence of transparency,” two independent researchers, Ian Jones of the University of Reading and Polly Roy with the London School of Hygiene and Tropical Medicine, wrote in a commentary published in The Lancet.

“But the outcome reported here,” they continued, “is clear and the scientific principle of vaccination is demonstrated.”

Their commentary did note that the design of the Russian vaccine, which relies on a genetically modified cold virus and is similar to half a dozen others including those made by Johnson & Johnson and AstraZeneca, is difficult to mass produce.

Though quick out of the gate with regulatory approval, Russia has lagged in mass production and actual vaccinations, the process that in fact protects people from illness and death.

The Russian financial company promoting the vaccine has said about two million people have been inoculated with Sputnik V worldwide, far fewer than with the Pfizer or Moderna vaccines.

The company, the Russian Direct Investment Fund, does not break down the vaccinations by country. But of the two million vaccinations, at least hundreds of thousands have been in countries outside of Russia, suggesting the government has quietly prioritized exports. 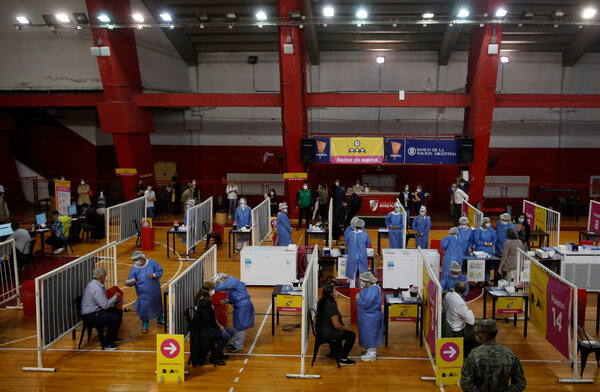 While beneficial for speeding global immunity to the disease, the policy has also reaped public relations and diplomatic benefits for the Russian government, even as residents of many provincial Russian cities still do not have access to shots. On Monday, for example, the authorities in the Leningrad region in northwest Russia said supplies had run out.

So far, 15 other countries, including Argentina, Hungary and Serbia, have approved the Sputnik V vaccine for emergency use.

Currently more than 150 million people — almost half the population — are eligible to be vaccinated. But each state makes the final decision about who goes first. The nation’s 21 million health care workers and three million residents of long-term care facilities were the first to qualify. In mid-January, federal officials urged all states to open up eligibility to everyone 65 and older and to adults of any age with medical conditions that put them at high risk of becoming seriously ill or dying from Covid-19. Adults in the general population are at the back of the line. If federal and state health officials can clear up bottlenecks in vaccine distribution, everyone 16 and older will become eligible as early as this spring or early summer. The vaccine hasn’t been approved in children, although studies are underway. It may be months before a vaccine is available for anyone under the age of 16. Go to your state health website for up-to-date information on vaccination policies in your area

You should not have to pay anything out of pocket to get the vaccine, although you will be asked for insurance information. If you don’t have insurance, you should still be given the vaccine at no charge. Congress passed legislation this spring that bars insurers from applying any cost sharing, such as a co-payment or deductible. It layered on additional protections barring pharmacies, doctors and hospitals from billing patients, including those who are uninsured. Even so, health experts do worry that patients might stumble into loopholes that leave them vulnerable to surprise bills. This could happen to those who are charged a doctor visit fee along with their vaccine, or Americans who have certain types of health coverage that do not fall under the new rules. If you get your vaccine from a doctor’s office or urgent care clinic, talk to them about potential hidden charges. To be sure you won’t get a surprise bill, the best bet is to get your vaccine at a health department vaccination site or a local pharmacy once the shots become more widely available.

Probably not. The answer depends on a number of factors, including the supply in your area at the time you’re vaccinated. Check your state health department website for more information about the vaccines available in your state. The Pfizer and Moderna vaccines are the only two vaccines currently approved, although a third vaccine from Johnson & Johnson is on the way.

That is to be determined. It’s possible that Covid-19 vaccinations will become an annual event, just like the flu shot. Or it may be that the benefits of the vaccine last longer than a year. We have to wait to see how durable the protection from the vaccines is. To determine this, researchers are going to be tracking vaccinated people to look for “breakthrough cases” — those people who get sick with Covid-19 despite vaccination. That is a sign of weakening protection and will give researchers clues about how long the vaccine lasts. They will also be monitoring levels of antibodies and T cells in the blood of vaccinated people to determine whether and when a booster shot might be needed. It’s conceivable that people may need boosters every few months, once a year or only every few years. It’s just a matter of waiting for the data.

Employers do have the right to compel their workers to be vaccinated once a vaccine is formally approved. Many hospital systems, for example, require annual flu shots. But employees can seek exemptions based on medical reasons or religious beliefs. In such cases, employers are supposed to provide a “reasonable accommodation” — with a coronavirus vaccine, for example, a worker might be allowed to work if they wear a mask, or to work from home.

If you have other questions about the coronavirus vaccine, please read our full F.A.Q.

“Publication in The Lancet today really shows that Sputnik V is the vaccine for all mankind,” Kirill Dmitriev, the director of the Russian Direct Investment Fund, said in a statement. “Today is a great victory.”

The vaccine is one of three that have completed late-stage trials showing an efficacy rate above 90 percent, along with the shots made by Pfizer and Moderna.

The version of the Russian vaccine tested in the trials must be shipped and stored at difficult-to-manage temperatures below about zero degrees Fahrenheit. The Russian ministry of health has also approved a freeze-dried version that can be stored in a refrigerator. Russia is marketing Sputnik V at a price of about $10 per dose for the two-shot vaccine.

The clinical trial conducted in Moscow late last year on about 20,000 volunteers showed only side effects commonly associated with vaccines, such as headaches or mild fevers.

The researchers determined that no so-called adverse events, or serious medical problems among the trial participants, were associated with the vaccine. In total, they found 70 serious medical episodes in 68 people in the trial, in both the placebo and vaccine group.

Notably, two people who were administered the vaccine died of Covid-19 following illnesses that began days after the first injection. The researchers said both people were likely infected before the trial began and fell ill before the vaccine had time to generate antibodies to the coronavirus.

The “disease had progressed before any immunity from the vaccine developed,” they wrote.

The Russian authors of The Lancet article also noted the trial in Moscow lacked ethnic diversity to ensure the vaccine is safe in nonwhite recipients. A trial of Sputnik V underway now in the United Arab Emirates includes a more diverse study group, the researcher say.

COVID-19 roadmap: How govt is planning to make the virus manageable in the years to come