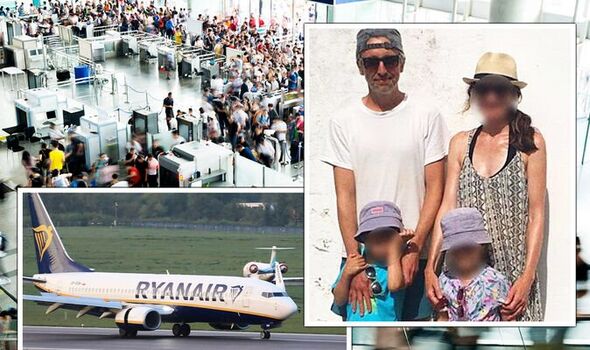 Jon Compson is one of an increasing number of Britons who say they have been from entering EU countries because of the expiry date on their passport. After the mix-up, he said he had to pay out more than £1,000 to be reunited with his family.

According to the Mirror, Mr Compson should have been able to catch his March 31 flight alongside his girlfriend and two children.

However, after a tense encounter with check-in staff, he said he was told he was unable to travel because his passport – which expires in October – was too close to the expiry date to be let in.

Since the UK left the EU at the start of last year, a number of third-country rules have come into effect for Britons travelling into the bloc.

Some require the passport must have been issued within 10 years prior to travelling, and be valid for up to six months when travelling.

However, Portugal is one of several countries that requires British passports only need to be valid for at least three months after the date of travel.

Airlines have been accused of misinterpreting the new EU entry requirements, denying transport to those with perfectly valid passports.

In January, two British holidaymakers were barred from a flight to Madeira on the grounds that one of their passports was not valid, even though it had nine months before it expired, according to the Guardian.

Pensioners Pat and Peter Cerely told the paper they were not the only couple to have faced the same issue on their November flight.

Mr Compson is the latest UK passport holder to speak out about the issue.

Ryanair staff at Stansted airport reportedly forced him to wave goodbye to his family before travelling home alone.

He told the Mirror: “It caused all of us a huge amount of stress, my girlfriend had to travel with all of our luggage including two big suitcases and two car seats.

“My twins were very upset and couldn’t understand why I was not with them. It’s the first time we’ve been apart since they were born.”

Believing that his travel document was not valid, Mr Compson reportedly booked a £177 emergency passport appointment and a new flight with EasyJet at a cost of £262.

However, after speaking with immigration officers, he said he realised the airline had made a mistake, and that he should have been allowed to fly to Portugal.

Mr Compson booked another Ryanair flight the following day for £282, which he was able to board with no issue.

He estimated the total cost incurred from last-minute bookings, appointments and car hires was more than £1,200.

The father-of-two added: “The financial expense is bad enough, but because of this error, my family and I spent two days under extreme stress and anxiety.”

He added: “I haven’t yet received a response back from Ryanair, however I am not very hopeful that they will pay out.

“Most likely I will have to continue my claim through the financial ombudsman service.

“I will definitely not fly with them again unless I have absolutely no choice.”

A pothole lot better: The shabbiest street surface in Britain gets FIXED!