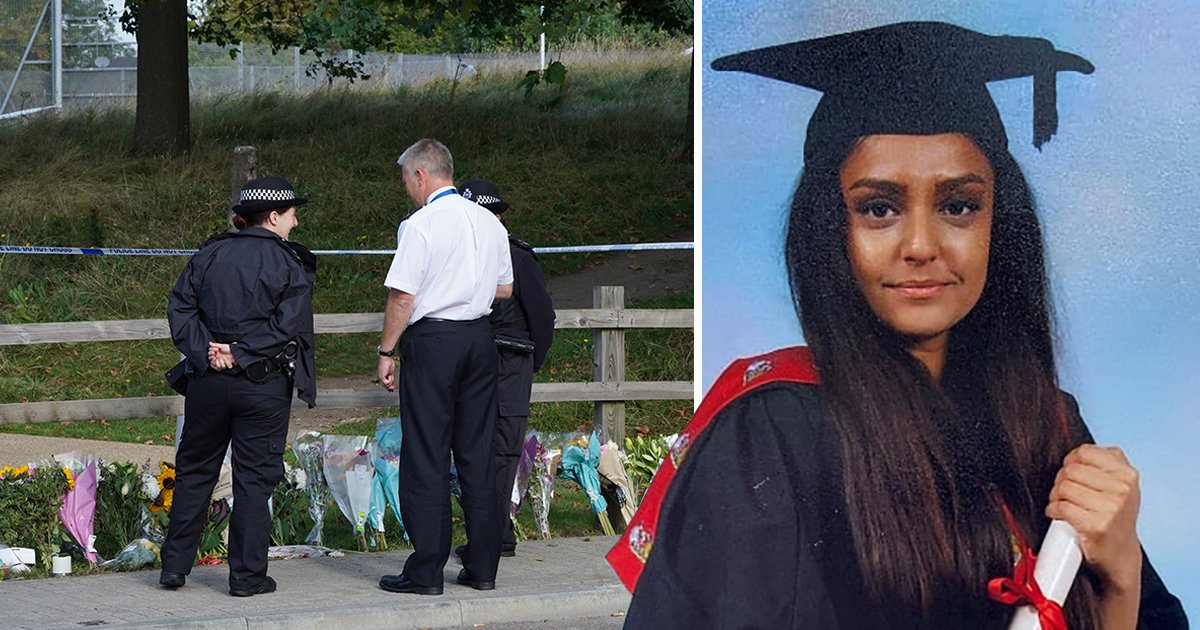 Police have insisted London is safe for women after a young primary school teacher was allegedly murdered by a stranger.

The body of Sabina Nessa, 28, was found in a park in Kidbrooke, Greenwich, on Saturday after she had gone missing the night before.

A murder investigation was launched after officers believe she was killed while on her way to a pub at around 8.30pm on Friday. Sabina was just five minutes away from her home.

Her housemate of four months, who did not want to be named, said she last saw Sabina when they hung out and took pictures together.

She told the Guardian: ‘I never thought something like this could happen to her. I had been texting her and it’s not like her to not reply to my messages.

Floral tributes and messages have been left at the scene near to where her body was found in Cator Park.

One bouquet had a card with it, which read: ‘She just wanted to meet her friend. She was minutes from home. She didn’t deserve this.’

Another person had written: ‘RIP Sabina. Gone far too soon. What a cruel world we live in.’

But Trevor Lawry, chief superintendent of the Metropolitan Police, insisted the area remains ‘safe for women’ despite the growing fears.

Yet when asked about the chance of a repeat of the attack, he said: ‘It’s always a concern that it may happen, but that’s not something that we have any intelligence on at this time.’

He added detectives are ‘keeping a completely open mind’ on what the motive of the attacker may have been, and he said the idea that the killer was a stranger is ‘definitely a line of inquiry’ for officers.

‘Sabina never arrived at the pub and is thought to have been murdered as she walked through the park,’ added detective inspector Joe Garrity.

‘Sabina’s journey should have taken just over five minutes but she never made it to her destination.

‘We know the community are rightly shocked by this murder – as are we – and we are using every resource available to us to find the individual responsible.’

Reclaim These Streets, an organisation campaigning for the safety of women and girls which has organised a vigil tonight, said: ‘This is an epidemic of violence against women. Enough with reports, what is the actual plan to keep us safe and alive?’

‘We do have an epidemic when it comes to violence against women and girls. I think us men have got to be allies in addressing this issue.’

The vigil will take place at 7pm in Pegler Square, Lewisham, close to where her body was found.

Paying tribute on social media, her sister said: ‘My beautiful, talented and caring sister, my inspiration to always put myself first and never let anybody put me down never in my life did I or my sisters or my mum or dad think this could happen to us.

‘No mother or father should have to go through this, may Allah grant my parents ease.’

Her cousin Zubel Ahmed told the BBC: ‘We’re still in shock. It’s been a few days but it’s still not sunk in yet.

‘We are all truly devastated. Her parents are absolutely shocked, they’re inconsolable still and understandably so, to hear of their daughter being taken away from them by some cowardly man is just horrific.

‘She honestly was the most caring person, kindest, sweetest girl you could meet. Sabina’s heart was as good as gold, she never had a bad word to say about anyone. Her sister is going to miss her so much.’

One man, 38, has been arrested on suspicion of murder and remains in police custody.

Officers from the Met have also released CCTV of another man they wish to speak to in connection with Sabina’s death, alongside pictures of a silver vehicle they believe he has access to.

Detective chief inspector Neil John said: ‘Our team have been working tirelessly to find the person responsible for Sabina’s murder and this has included an extensive trawl of CCTV, work which remains ongoing.

‘We would ask anyone – especially those in Kidbrooke and the wider area of Lewisham and Greenwich – to take a careful look at these images to check whether you know who this man is or have seen him over recent days.

‘Any information as to his identity or whereabouts could be vital for our investigation so we are asking you to share this image far and wide to ensure as many people as possible see it.’

A post-mortem examination carried out on Monday was inconclusive.

Rome could face second lockdown after coronavirus cases creep back up