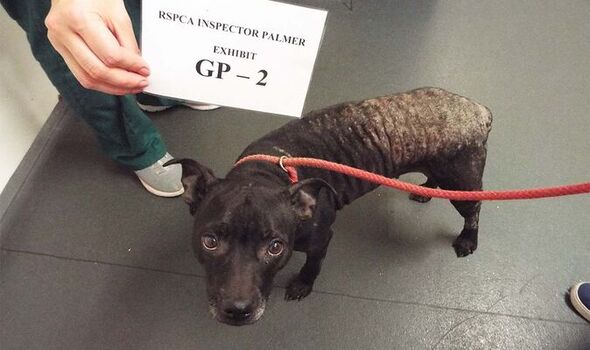 Bessie was rescued from a filthy property in Teeside in August last year along with her her emaciated canine companion, Annie, who was starving to death. She was lying in her own filth and was completely bald on her body due to an untreated flea infestation which she could not stop scratching, according to the RSPCA.

Discussing the rescue of the dogs, RSPCA Inspector Garry Palmer said he was met with a “pitiful sight” when he came across Annie, a white Staffordshire Bull Terrier.

He said every bone in her body was protruding through her skin and was so weak she could not stand and could only just lift her head up enough to drink water from a bowl next to her. He said she was the “thinnest dog he had seen alive”.

In another room, Garry then came across dark-coloured Staffordshire Bull terrier Bessie. She had a more normal body weight but had a “horrific” flea infestation.

He carried both dogs to his van and rushed them for emergency veterinary treatment. Sadly, the vet decided that Annie had to be put to sleep to end her suffering. However, Bessie responded well to treatment and was rehabilitated by RSPCA Macclesfield, South East Cheshire and Buxton. 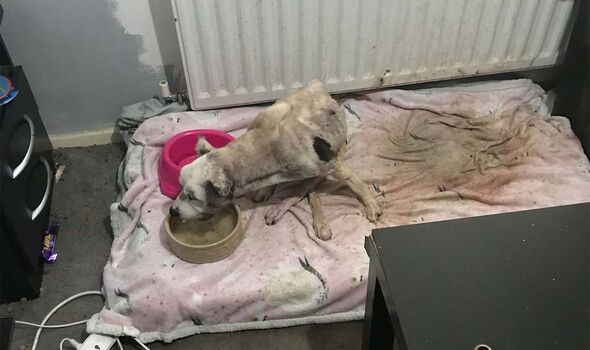 Bessie has now found a loving new home with Rob McNeil, 31, and his partner Jessica Murray, 27, who live in Buxton, Derbyshire.

Her fur has grown back and she looks like a completely different dog. The couple say her initial shyness has now gone and she has a bouncy personality.

Rob, a dog trainer, said: “We went to see Bessie in her foster home at first and she was quite withdrawn – she would say ‘hello’ and make a fuss then go back to sitting quietly.

“It seems she wasn’t used to human interaction and was obviously timid from the circumstances she lived in before and it must have been awful for her – especially as her canine friend was left in such a suffering state. 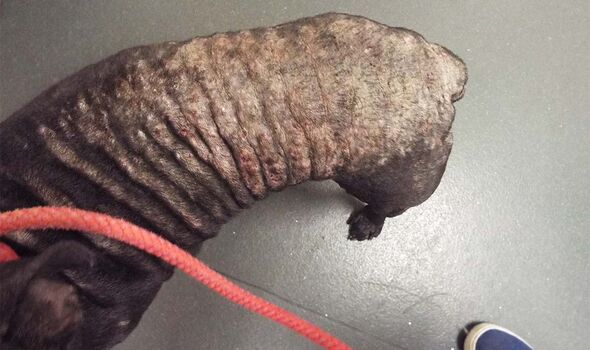 “We rehomed her in November and by the new year her personality had really come through. She is a typical bouncy Staffy who loves people and enjoys playing with her tennis ball. She is still learning how to play with people – but she is doing so well.”

Jessica added: “Bessie has come on leaps and bounds and she loves her long walks and getting plenty of love and affection. It is so sad to think of her past but it is great she has such a happy future to look forward to thanks to the work of the RSPCA.”

Garry said he is delighted to see Bessie enjoying the life she deserves – and he is pleased that something positive came out of such a tragic case. He said: “I was called to investigate following reports by a concerned member of the public about the welfare of the dogs and when I went in I was truly shocked.

“Poor Annie had access to a water bowl and when she went to drink it she could only lift her head and was propped up on her front two legs, but she was unable to use her rear legs and stand.

“It was obvious to see she was unbelievably underweight with a skeletal frame showing and I could see fleas crawling all over this dog’s body. It was also clear to see that the dog had overgrown nails and fur loss on her paw region and one paw had a growth present. 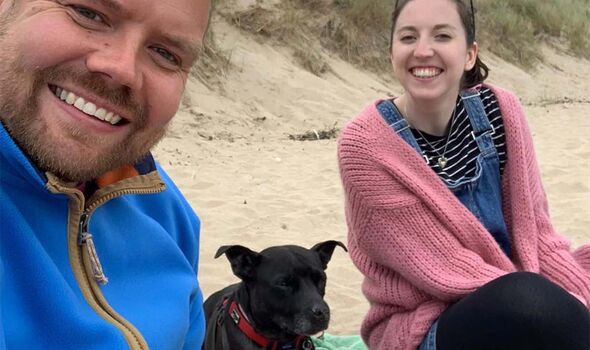 “Meanwhile Bessie was bald from the base of her neck to the tail and her skin had become thickened and scabby. She was in discomfort from the fleas who were crawling on her body.

“A vet said both dogs had suffered for at least a month – it was a really upsetting incident to deal with and one of those cases you don’t forget.”

Sadly Bessie and Annie are among many dogs who suffer at the hands of humans and as part of the RSPCA’s Cancel Out Cruelty campaign, the charity highlights that despite being man’s best friend a staggering 44,427 reports of dog cruelty were made to the RSPCA  involving 92,244 dogs last year (2021).

Dermot Murphy, RSPCA Chief Inspectorate Officer said: “It is incredibly worrying that still in 2022 we are seeing this high level of cruelty towards animals. 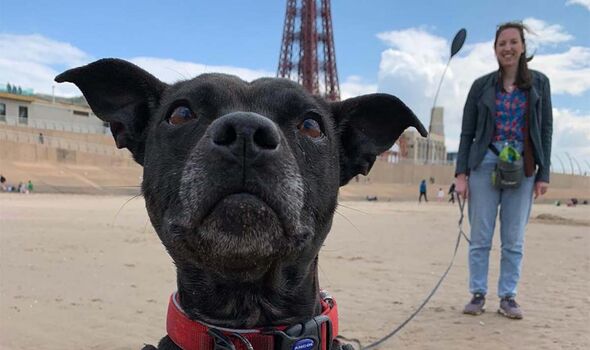 “We’ve seen a rise in reports of beatings and with the increase in pet ownership and financial pressures growing we are sadly braced for a summer of suffering which is why we are calling on the public to help us Cancel Out Cruelty and help more animals like Bessie.”

The RSPCA’s rescue teams need support to stay out on the frontline as the only charity rescuing animals and investigating cruelty. Their frontline teams are working hard to rescue animals in need this summer but need help to Cancel Out Cruelty.