The woman from Barking attacked the London Mayor for failing to face the residents of the now destroyed block of flats and accused him of parading with the press in the area for a “publicity stunt”. The East London resident left Sadiq Khan speechless as she shouted: “You come along here with all your press and all your whatever not. How about you go in there and face the residents that you have failed?

“Instead of chasing around and banning low emissions, how about you sort out these properties?

“You’re standing here with your press because it is a publicity stunt.

“But not once you have faced those residents. Not one resident have you gone and faced.

“You should have been there last night.” 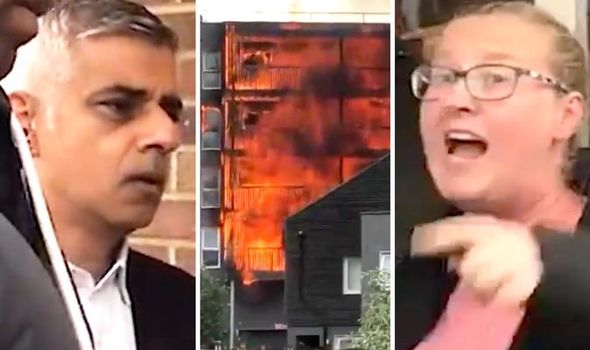 Instead of chasing around and banning low emissions, how about you sort out these properties?

Two people were treated for smoke inhalation after 20 flats were destroyed by the violent blaze on Sunday.

The blaze spread over six floors of the block of flats in De Pass Gardens, Barking.

Resident Mihaela Gheorghe told the BBC she had “raised several issues” about the safety of wooden balconies on the blocks of flats.

She added: “I was in my fourth-floor flat when the fire started. We ran out. The fire brigade came but they found it hard to find a water supply at first.”

“We said that one day a fire is going to happen.

“We raised several issues to the builder, the maintenance companies and the council about the safety of having all these wooden balconies.”

People affected by the fire were told to “take rest” at the Thames View Community Centre – about a mile away from the scene.

Sadiq Khan said the “shocking” fire could “easily have resulted in fatalities”.

He said: “This incident highlights both City Hall’s total lack of powers over private building owners and the slow response from the Government and developers to the fire at Grenfell.”

Police appeal after man raped in Grenfell Park in Maidenhead