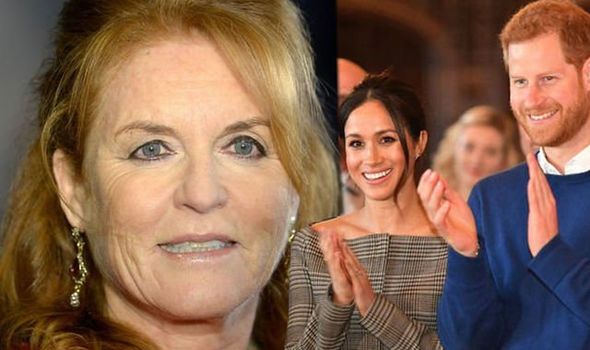 THE Duchess of York has told how her only advice to the Duke and Duchess of Sussex is to “be happy”.

Like Harry and Meghan, Sarah Ferguson also bared her soul to US chat show queen Oprah Winfrey, following her 1996 divorce from Prince Andrew.

Sarah, 61, said: “Oprah helped me greatly when I went to the US and was interviewed. I’m a great supporter of Oprah.” Speaking of the US-based royals, the duchess said: “I wouldn’t presume to give advice to Harry and Meghan, except to say ‘be happy’.”

Sarah also she paid tribute to her “best friend”, the late Princess Diana.

She said: “There was nobody like her and there never will be.”

The Duchess of York spoke to Ms Winfrey in 1996, shortly after she ultimate her divorce from Prince Andrew.

At the time, she spoke candidly about life as a member of the Royal Family, saying it was “not a fairytale”.

She continued: “You didn’t marry the fairytale, you married a man.

“You fell in love and married a man, and then you have to come to terms with the fairytale.

Fergie is gearing up for the release of her first historical novel Her Heart for a Compass, inspired by the Duchess’ great-great-aunt, Lady Margaret Montagu Douglas Scott.

But the Duchess of York is already a well-established author, having written more than 70 books – including several successful children’s stories.

Speaking about Meghan’s publishing debut with The Bench, Sarah said: “I think it’s wonderful that Meghan has written a children’s book; having done that myself, I know the effort it takes.

When to expect the second Cost of Living payment