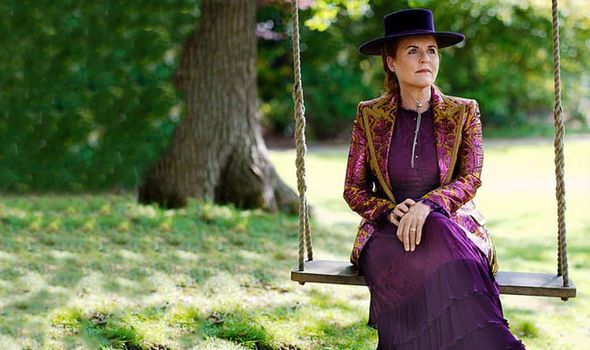 The Duchess of York, 61, hoped to provide some assistance over the way her life was portrayed, but found she is only a minor character in the show. She joked: “Hello? Where is Fergie?” She said she even wrote to Andy Harries, an executive producer of the Netflix series, offering her input.

Fergie said: “I said to him, ‘Why can’t I help my character?'” But her offer was declined, she explained.

The Duchess has been regularly embroiled in controversy since her marriage to Prince Andrew in 1986 and their subsequent divorce in 1996.

But she insisted that she is finally free of “self-sabotaging Sarah”.

She admitted she still struggled with her body image though.

In an interview with the digital version of Town & Country magazine, she said: “She’s still with me, that person who thinks she’s fat, ugly and disgusting, and she still has to have her hair done to talk to you, but she’s now not so vocal. The truth is, I am 61 and I’m free of the self-sabotaging Sarah.”

Fergie said she felt her late sister-in-law Princess Diana was always portrayed as a “saint” and she as a “sinner”.

But she suggested it was no surprise that she was not invited to the Duke and Duchess of Cambridge’s wedding in 2011.

She added: “I didn’t think I was probably worthy to go to their wedding. I took myself to Thailand, actually, to be far away from it so I could try and heal.”

Fergie did the interview to promote her new book, a romance novel called Her Heart For A Compass, written with author Marguerite Kaye.

Royal Ascot: How Mike Tindall had secret giggle with Queen over surprise gaffe