Sasha Johnson, 27, was shot in the head in the early hours of Sunday morning at an address in Peckham, south London. The Oxford graduate is fighting for her life in a London hospital after undergoing surgery.

Three teenagers and two older men were first detained in relation to other offences, but have now been arrested on suspicion of attempted murder.

The first suspect, a 17-year-old boy, was held on suspicion of possession of an offensive weapon and drug dealing on Tuesday afternoon.

Police then raided an address in Peckham where they arrested three men – aged 18, 19 and 28 – on suspicion of affray and possession with intent to supply class B drugs.

A fifth man, aged 25, was arrested later that evening following a car chase, also in Peckham, on suspicion of affray and failing to stop for police.

Detective Chief Inspector Richard Leonard, of the Metropolitan Police, said: “While the investigation remains in its early stages, these arrests show that progress is being made.

“However, I would continue to appeal to those who may hold information about the events that led to Sasha receiving her horrific injuries, or about those responsible, to do the right thing and come forward and speak to police.” 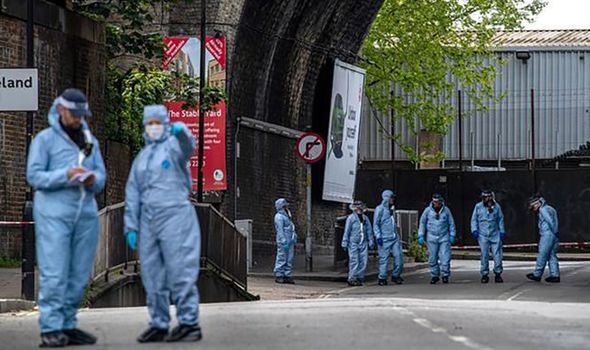 Ms Johnson, a mother of two, was at a party in the back garden of a home when four men in dark clothing allegedly burst in and shots were fired.

A man aged in his 20s suffered a “superficial” knife injury but he was not seriously hurt.

A woman who was hosting the party told My London how people were “panicked” and “running” following the alleged incident.

Around 30 guests were present, said to have been to celebrate a birthday.

Witnesses, particularly those who attended the party, have been encouraged to come forward and assist police.