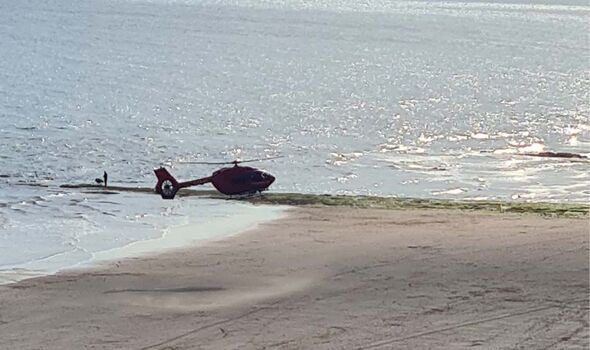 A 13-year-old schoolgirl who  struggled with loneliness during lockdown tragically ended her life while on holiday.  Sensitive and bright Safia Lardner and her family had travelled from their home in Moseley, Birmingham, to visit a holiday park in Exmouth.

According to DevonLive, on the last day of their Easter half-term four-day break on April 16, 2021, Safia chose not to go swimming at the holiday complex with her parents and brother and said she would remain in the caravan. However, on their return around an hour to 90 minutes later, she was nowhere to be seen.

The family became aware of an air ambulance and emergency services at the complex and discovered Safia had tragically fallen from a nearby cliff, suffering fatal injuries. Two eyewitnesses reported seeing what they had first thought was a “dummy” tumbling from the cliffs onto the beach below. They then called 999.

Following Safia’s death, it was discovered that she had been sending messages to a friend via WhatsApp revealing that she was intending to take her life over the course of the last few days of her holiday and that, on one of those days, she had decided not to.

A post-mortem examination confirmed the cause of her death was multiple injuries due to a fall from height. The inquest heard Safia had no previous history of mental health illness.

Recording a conclusion of suicide, assistant coroner Luisa Nicholson said: “Safia walked to nearby cliffs, crossed a grassy area leading to the edge and jumped in an apparent means to end her life. It seems from a series of text messages to a friend… she had intended to do so for some days on her holiday.”

Addressing the family, she said: “I can’t imagine what you have been through and the absolute horror of returning from holiday without Safia.”

Speaking after the inquest, her father Robert said he believed her death was due to the effects of lockdown which left children being schooled from home and not being able to see their friends. He said: “She was left living without contact with friends or being going able to go to school. Instead, she was stuck at home in front of a computer doing school lessons for six hours at a time.

“She had never had any problems before [with her mental health]. Her brother, who is a little bit older, managed to go out and see his friends but she couldn’t see anyone and was lonely. What we found from her text messages was she was trying to meet up with friends but none of them were allowed out because of lockdown.”

Paying tribute to Safia, her mother Marcia said: “She was always happy and smiley. She loved her dog Freddie. We had no idea she wanted to end her life.” She added: “Being on the internet a lot didn’t help. It obviously affected her.”

Robert added: “She was always top of the class and was the teacher’s pet. She liked every subject really and loved drawing.”

Heartbroken by her death, he said: “We couldn’t have any of her friends at the funeral because of lockdown when the limit was 30 people. Now everything is back to how it was except that for us, we are stuck in that time and will never move on. We will never get over it.”

Following her death, tributes were paid by Safia’s former school Park Hill Primary School in Moseley. The school said on its website: “Safia was a much-loved Park Hill pupil of who many of our staff have very fond memories.

“She was a thoughtful girl, with a quirky sense of humour and a talent for kindness towards others. We will all miss her. As Safia enjoyed caring for birds, we are raising money for The Royal Society for the Protection of Birds (RSPB) in her memory.”

A JustGiving page set up by the school in aid of the RSPB said: “Much loved daughter of Marcia and Robert, sister of Bertie. Safia was sensitive and thoughtful, with a quirky sense of humour and a talent for kindness to others. She attended Park Hill Primary School and Queensbridge Secondary School in Moseley.”

The Samaritans can be reached round the clock, 24 hours a day, 365 days a year. If you need a response immediately, it’s best to call them on the phone. You can reach them by calling 116 123, by emailing [email protected] or by visiting www.samaritans.org

Royal Family baby names: This royal name is the most popular for UK newborns