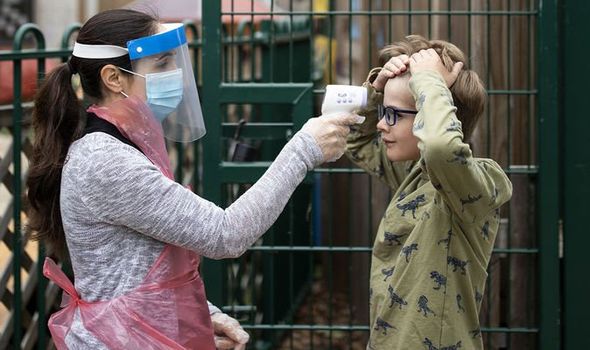 “It’s the right time for children to come back,” he said. But he rejected a proposal floated by the Scottish government for pupils to be told to wear face masks in school corridors and other communal areas outside classrooms. “We’re not in a position where we are suggesting that because we think there is a system of controls, that are in place in all schools, for children to be able to return safely and for staff to be able to return safely,” he said.

Mr Williamson spoke out yesterday after Scottish First Minister Nicola Sturgeon announced her administration was launching a consultation into ordering pupils to wear masks when moving between classrooms.

“We’re consulting on this specific measure because first of all, mixing is more likely in corridors and communal areas, increasing the chances for transmission,” she said.

“Whether it’s making sure it’s maintaining good hygiene and good distancing, good flows of pupils moving through the schools, staggered starts, all of these measures are about ensuring children remain safe and those who work in schools remain safe.

“By doing that, we can see all children returning back to their classes and we’ve already seen over 1.6 million children going back to school safely, not just safely for them but also safely for those who work in schools,” the Education Secretary said yesterday during a visit to a school to inspect preparations for the beginning of the new term.

Mr Williamson also said that closing schools again in areas of any imposed local lockdowns would be “the absolute last resort”.

“So, we would see schools closing as the absolute last resort,” he said.

Mr Williamson delivered his message after Boris Johnson returned to Downing Street after his summer holiday in Scotland to oversee the effort to reopen schools.

A Number 10 spokesman said the Prime Minister “sorry for the distress” caused to pupils by the exams fiasco.

Ministers were forced to scrap A-level grades awarded by a computer algorithm introduced because exams were abandoned during the coronavirus lockdown.

Grades predicted by teachers were used for the final grades for A levels and GCSEs instead.

“The PM is of course sorry for any distress that has been caused.

“Our focus has been and will be ensuring that students can move onto the next phase and ensuring kids can get back to school next week,” the spokesman said.

He added: “So, as the Education Secretary set out and as we’ve said a few times now, we’re of course sorry for any distress and anger that was felt by students around the awarding of exam results this year.

“The Education Secretary acknowledged that it was a difficult time and apologised for the distress caused.”

The spokesman also confirmed that the Government did not plan to change guidance on face masks in schools.

“There are no plans to review the guidance on face coverings in schools.

“We are conscious of the fact that it would obstruct communication between teachers and pupils,” the spokesman said.

Tory MP Robert Halfon, chairman of the Commons Education Committee, said the Government had to “do everything possible to get our children back to school next week”.

He said: “In my view this is possibly the most important issue facing our nation. We’ve had millions of children not learning during the lockdown, millions of children with very little contact with teachers, we’ve got safeguarding issues, a potential epidemic of education poverty, we’ve got a digital divide with hundreds of thousands of kids not having computers at home, so whatever happens we do need to get our children back to school.

“Of course we’re in a national pandemic and people are concerned, but I’ve been campaigning for a long time for children to go back to school and I really welcome what the chief medical officers have said that actually the risks (of) staying at home, the risks to mental health, safeguarding, their educational life chances are much greater than the minimal risks, thank goodness, of children getting the coronavirus, so we have to do everything possible to get our children back to school next week.”

“What the Labour Party should be doing is encouraging the trade unions as much as possible to help get the children back to school, rather than put obstacles in the way,” the MP said.

He added: “The question we’ve got to ask is why is it that it’s okay for children and parents to go to restaurants, to go to Primark every day, but the unions don’t feel that it’s right for them to go back to school?”