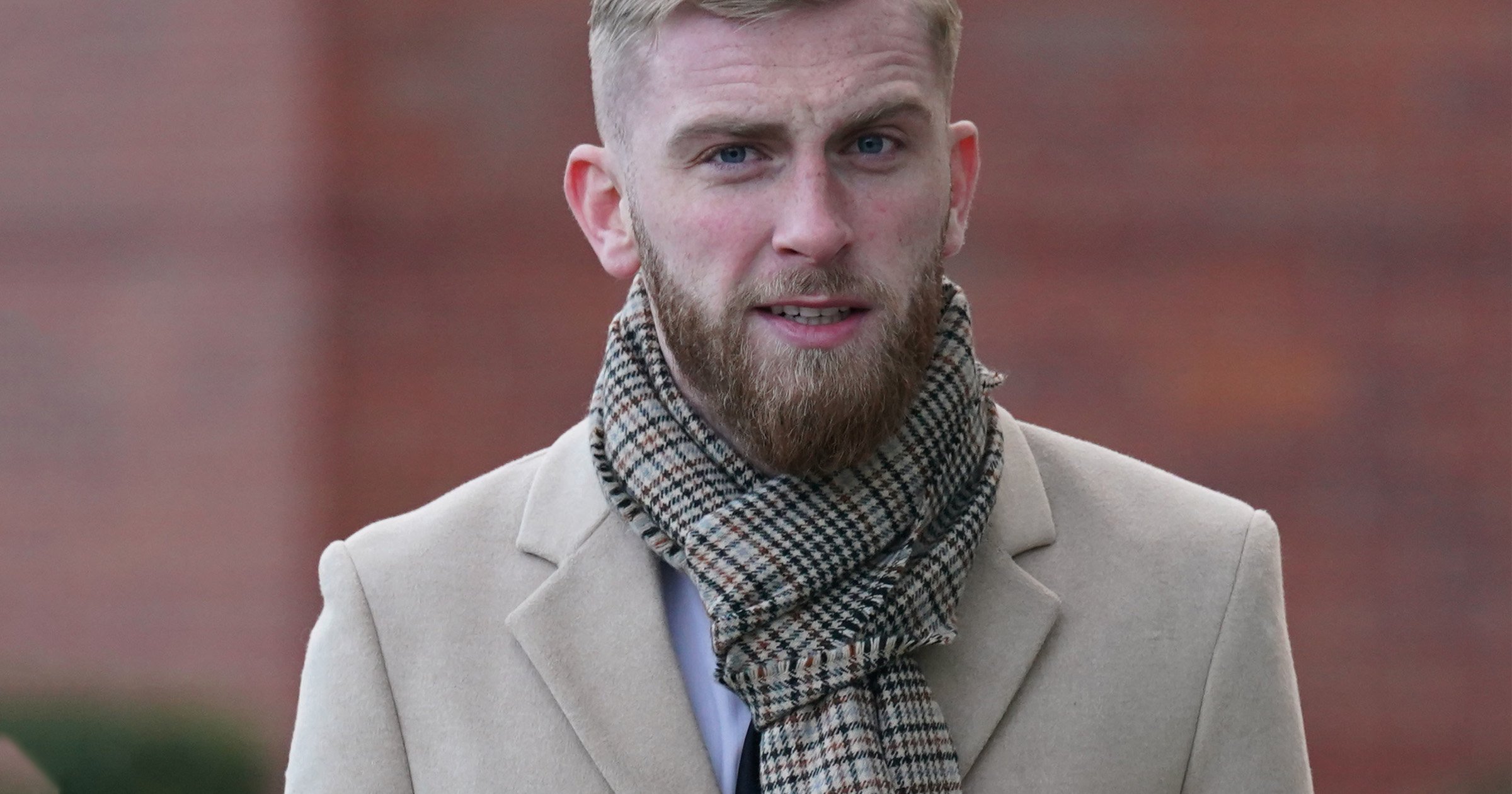 Scotland and Sheffield United striker Oli McBurnie has been cleared of assaulting a fan during a pitch invasion.

The footballer denied stamping on Nottingham Forest supporter George Brinkley, claiming he hopped over the alleged victim to protect his injured foot.

Prosecutors had alleged McBurnie, 26, suffered ‘a loss of temper and control’ and twice stamped on Mr Brinkley after United’s Championship play-off semi-final defeat in May.

A social media video of the incident, which went viral, was played to McBurnie’s trial, which prosecutors alleged showed stamping motions.

But finding him not guilty of a single charge of assault by beating, District Judge Leo Pyle said his judgment was based on evidence heard in court and ‘not the instant judgment of social media’.

In his ruling, the judge said some of the evidence given by alleged victim George Brinkley had been ‘somewhat flimsy’.

Judge Pyle had been urged by McBurnie’s barrister to find that ‘a degree of club bias’ was responsible for the accounts given by witnesses to the incident.

During her closing speech, McBurnie’s barrister Lisa Judge said the footballer had lifted his boot ‘like a ballerina’ to clear the legs of the complainant, who was ‘lying on the floor of a pitch he ought not to have been on’.

Clearing McBurnie, District Judge Pyle said of mobile phone footage of the alleged attack: ‘The defendant’s foot is nowhere near Mr Brinkley’s left shin. He (McBurnie) quickly and clearly lifts his leg up to avoid the complainant.’

Brinkley, 27, had told the court yesterday that he was singled out among hundreds of fans on the pitch at the City Ground and attacked, after telling the star: ‘You’re shit at football.’

Giving evidence in his defence at Nottingham Magistrates’ Court today, McBurnie said he was wearing a protective boot at the time of the incident, after spending six weeks out injured with three broken metatarsal bones and a torn ligament.

McBurnie, of Knaresborough in North Yorkshire, told the court: ‘About a week before I was allowed to start putting pressure back on to that foot.

‘It was like learning to walk again a little bit.’

Describing the pitch invasion as ‘manic to say the least’, McBurnie denied being angry after United’s penalty shoot-out defeat.

‘It was more consolement with the rest of the boys,’ he said.

Explaining why he went towards Mr Brinkley, McBurnie said he was going to the aid of teammate Rhian Brewster, after seeing Blades captain Billy Sharp falling to the floor with a man in a yellow shirt running away from him.

The court has heard a Forest season ticket-holder, aged 30, was handed a 24-week jail sentence two days after he head-butted Sharp, causing an injury to his mouth.

McBurnie told the district judge who was trying his case: ‘When I saw Billy go down the initial reaction is shock. It was kind of hard to believe.

‘Literally seconds later I have turned round and I see kind of another melee – what I thought was another one of the players being attacked.

‘I was just concerned for me and my mates. There was a lot of people on the pitch. I just wanted to get my teammates and friends back into the tunnel to safety.’

Asked by his barrister, Lisa Judge, what he was doing during the alleged assault, McBurnie answered: ‘Trying to find my balance. I am trying my best to stay out of his way.

‘Literally there is no space. There is nowhere else for me to go but to the right-hand side. My left foot is on the floor within his two legs.

‘I was using my arms for balance – it was kind of a hopping motion. It’s hard to get your balance with so many people and obstacles in the way.’

At the time of the incident, McBurnie said he thought there was ‘zero contact’ with Mr Brinkley.

Asked if he took exception to being called a ‘shit footballer’, McBurnie asserted: ‘It goes with the territory, I guess. I am kind of used to it by now.’

Prosecutor Simon Jones asked him if he assaulted Brinkley in a ‘red mist’, but McBurnie replied: ‘I had just been out injured for six weeks with one of the worst injuries of my life.

‘If you think I would risk making it worse over a fan then you don’t know me very well. I am a nice guy and I take my career very seriously.’