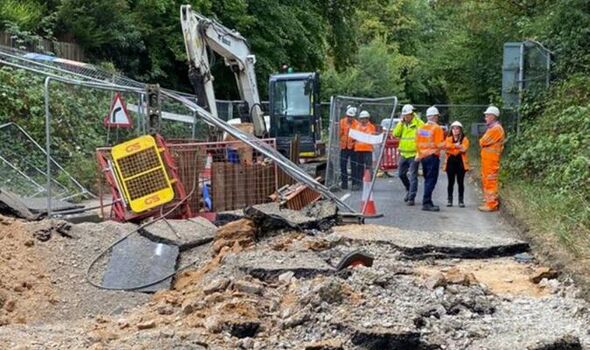 Leicestershire Police say a female is being treated for unspecified injuries at Leicester Royal Infirmary following the incident in Reservoir Road, Cropston. Emergency services, including East Midlands Ambulance Service, were called to the scene.

Their injuries are not thought to be serious.

A police spokesman said: “We received a call from the East Midlands Ambulance Service just before 2.30pm yesterday, stating that a pipe had burst in Reservoir Road, Cropston, and that a female was taken to Leicester Royal Infirmary to be treated for injuries that weren’t life-threatening or life-changing.”

A resident posted on Twitter saying the girl was “lucky to be alive” following the incident on Tuesday.

They posted on Twitter: “There is a girl in hospital with broken bones, but lucky to be alive.”

A villager, who did not want to be named, told Leicestershire Live people living nearby heard a “loud bang” followed by “screaming”.

They said: “I spoke to someone who lives nearby who told me that people heard a loud bang followed by screaming. Some kind of hole had apparently developed in the road and Severn Trent had sent engineers to investigate.

“They must have tapped into something because the water main just blew up. There were two workmen inside the hole at the time who were hurt but not badly. However, I was told that a piece of Tarmac had flown across the road in the blast and hit someone in the head.”

A large hole, surrounded by debris, can be seen where the road has collapsed.

Health and safety officers were on site this morning.

The Health and Safety Executive (HSE) launched an investigation into the incident.