Home » Europe » Second county in Wales to go into lockdown 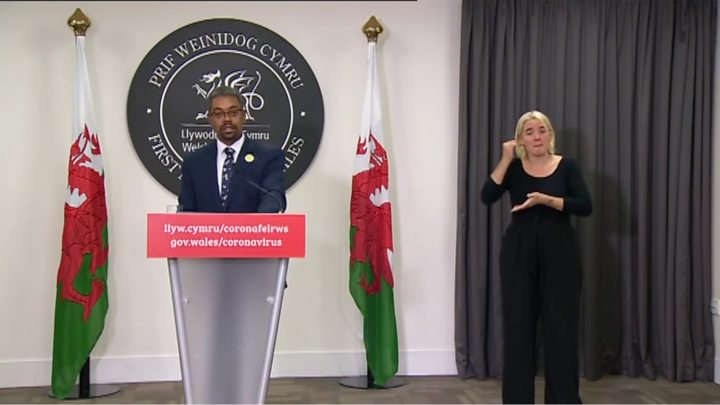 A second county in Wales will go into lockdown because of the rate of coronavirus cases.

The 240,000 people living in Rhondda Cynon Taf (RCT) will have restrictions imposed on their daily lives.

From 18:00 BST on Thursday, people will not be able to enter or leave the area without a reasonable excuse, such as travel for work or education.

All licensed pubs, bars and restaurants will have to shut by 23:00 every day, once the lockdown comes into effect.

People will also be banned from meeting people outside their own households indoors.

Health Minister Vaughan Gething said there had been a “rapid” rise in cases, with 82.1 infections per 100,000 people over the past seven days.

It is the second local lockdown in Wales, after Caerphilly county borough was made subject to restrictions last week.

A trip to Doncaster was said to be associated with one of the clusters of cases in RCT.

A statement on Wednesday evening from the Welsh Government clarified the party did not attend the races being held in the South Yorkshire town, as part of a pilot event for 2,500 people.

Regarding concerns that a coach party from South Wales attended Doncaster Race Course over the weekend, we understand that though the original intention of the party was to travel to the Doncaster Racecourse, the party did not enter the racecourse as originally planned.

Wednesday’s rate of positive tests for the past week in RCT was 5.1% – the highest in Wales. Mr Gething previously warned a positive rate of 4% across Wales would trigger a national lockdown. The Wales average is 2.4%.

Figures on Wednesday showed RCT’s case rate had almost caught up with Caerphilly, which had 83.4 per 100,000 people over the past seven days.

The lockdown restrictions have been imposed despite people in RCT having been asked to take extra precautions last week.

A review into the lockdown will be held in two weeks’ time.

Contact tracing teams have been able to trace about half of the coronavirus cases in RCT “back to a series of clusters within the borough”, Mr Gething told a press conference.

“The rest are evidence of community transmission.”

One cluster is associated with a rugby club and a pub in the lower Rhondda valley, another is connected to a club outing to Doncaster, which Mr Gething said stopped off at a series of pubs on the way.

“My message is that is absolutely the wrong thing to do,” said the health minister.

“Somebody in that party should have recognised they were acting outside the rules and they were a significant risk to themselves and their families at home.

“This wasn’t a group of young people – it’s entirely possible for people in their 40s and 50s to behave irresponsibly, and we’ve seen a significant spread from that event.

“So think about the choices you’re making and about how you, your family and community would want to be kept safe.”

Doncaster Racecourse has confirmed it had no ticket bookings for any groups from south Wales for the event.

“Doncaster Racecourse has received no contact from any organisation, including the NHS or the Welsh Government, to verify the attendance of any individuals at last week’s event for the purposes of track and trace,” it said.

What are the rules?

Under the lockdown rules, no-one will be able to leave or enter the county without a reasonable excuse.

The list of excuses to travel is the same as in Caerphilly, including:

Motorists will be able to drive through the county borough, providing they do not stop.

The rules can be enforced by a system of fixed penalty notices, which start at £60 to a maximum of £1,920, or unlimited fines in the courts.

Joy Carter owns the florist Flowers By Joy in Aberdare town centre. She described the local lockdown as a “nightmare again”.

“It’s crazy. Last time it was so difficult. I don’t understand how I can go into a pub but not a house.

“I’m doing flowers for a wedding this Saturday – what will they do? It’s been so difficult with the weddings and funerals.”

She said the town had been busy all day, but added: “What’s it going to be like tomorrow?

“As for trade, people are going to be too afraid to go out again, especially older people. A few have said they had better stay in.

She said she will stay open “even if I put the shutters down and just take orders over the phone”.

“I don’t think anyone can be blamed. I think it’s going to be around for a long time,” she said.

Barber Sirwan Hussein said it was clear there was problems with people respecting covid rules.

“I think people don’t care about social distancing,” he said.

“I’ve been around everywhere, and not many people are wearing a mask.

“The UK is going to be locked down again – we’ll all be in lockdown again.”

He said he had a client who did not want to wear a mask, even though it is now the law indoors in Wales.

Aberdare butcher David Bishop said he did not believe the new rules in RCT would not have a major impact.

“Everything is going to be open as normal, it just affects the daily lives of families meeting together,” said the 54-year-old.

He said there could be a silver lining for businesses such as his.

“We were open right through the original lockdown, and in real terms it actually got busier for us,” he said.

“Now it’s back to normal levels – maybe this will make us busier again.”

Rules allowing people to meet six people from their extended household in Wales will also not apply in RCT.

Mr Gething said residents will be able to meet outdoors “for the time being”.

Can I go to University of South Wales?

University of South Wales students will still be able to travel in and out of RCT for their studies, despite the new restrictions.

Speaking in the Senedd, Mr Gething said: “It would be permissible for people to move into that area and to stay there for their study.”

He said students would need to observe the local restrictions while they were there.”

What do the local MPs say?

Rhondda Labour MP Chris Bryant said: “Now we need to stick to the rules and get the transmission rate down to protect the NHS and the most vulnerable.”

Leanne Wood, Plaid Cymru Rhondda Member of the Senedd (MS), said it was “disappointing, but not a surprise”.

“The sooner we get this under control, the sooner we can ease restrictions and the safer our loved ones will be,” she added.

Pontypridd Labour MP Alex Davies-Jones said: “I know the news of tighter coronavirus restrictions will be worrying for people across Ponty, but I am confident that this is the right approach in order to reduce the number of cases locally.”

Pubs to shut at night, but not to close altogether

The difference in rules around pubs in RCT and Caerphilly prompted questions from the Welsh Conservative health spokesman Andrew RT Davies.

“The health minister must explain the rationale behind this and give guidance across Wales to prevent other lockdowns.”

Mr Gething told his press conference that pubs were a “factor in transmission” in RCT, but had not been in Caerphilly.

He said a series of bars and pubs have faced closures and improvement notices in the area.

A further 50 licensed premises were visited by council officers over the weekend, Mr Gething said.

Asked why he was not closing all pubs, Mr Gething said: “If there are no opportunities to drink in licenced premises we may see more people breaking the rules and drinking in each other’s homes.”

Ystrad councillor Elyn Stephens told the Local Democracy Reporting Service she welcomed the decision to impose fresh restrictions, however she said some concerns remained over pubs.

“There are questions to be answered about why the lockdown wasn’t localised to the known clusters, in the lower Rhondda, a fortnight ago when they first became apparent.

“The response I’ve received so far to the announcement has been overwhelming anger and frustration that the pubs are still open, when residents cannot see their families.”

Italy closed its ports to NGOs, but boats keep on arriving