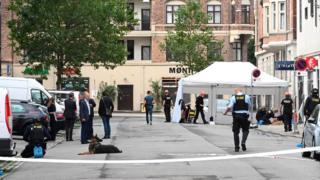 An explosion has hit a police station in the Danish capital, Copenhagen, the second blast to hit the city this week.

The building was damaged but no-one was injured in the incident early on Saturday, which took place just outside the city centre.

On Tuesday, there was a powerful explosion outside the national tax agency, in what the authorities say was a deliberate attack.

It is unclear if the two incidents are linked.

Police say they are looking for a man who was seen fleeing the scene of the police station blast, who was wearing dark clothing and white shoes.

“This was not an accident, but a deliberate act,” Chief Police Inspector Jorgen Bergen Skov said, adding that while the investigation was still under way, nothing suggested it was terror-related.

“These were attacks against buildings, not people,” he said. “But it is too early to say anything about the motive.”

One person was slightly injured in the explosion at the tax agency earlier in the week.

The blast, which happened late on Tuesday, smashed windows and damaged the front of the building.