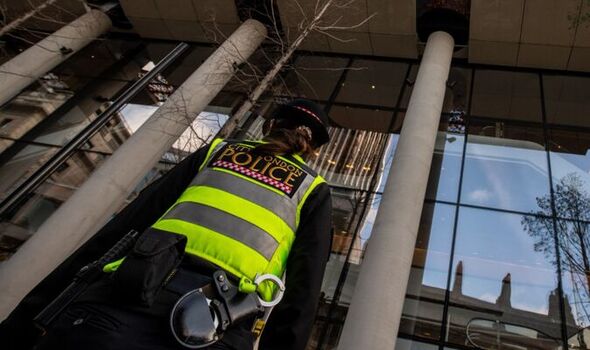 The City of London Police confirmed in a statement that its officers were responding to reports of a “suspicious package”.

A cordon has been established around Mansion House in the Walbrook ward.

This is the official residence of the Lord Mayor of London.

The cordon has resulted in a number of nearby roads being temporary closed off.

The CLP said: “We are currently dealing with a report of a suspicious package at Mansion House.

“We will provide further updates [when possible].”

Times journalist Stéphanie Bosset, reporting from the scene, wrote in a post on Twitter that “police vehicles keep arriving”.

She added: “Have walked into a very large cordoned-off area in the Bank. Officers calling it a ‘security alert’.

Transport for London soon after provided an update, advising travellers using its services of temporary changes.

“The others are all closed at the request of the police.”

In a later update, TfL said the station had been closed altogether “due to a security alert at street level”.

CLP Chief Inspector Nikki Gander said: “Officers were called to a report of a suspicious package near Mansion House at 10.06am this morning.

“This is currently being investigated and precautionary cordons and road closures have been put in place.”

Coronavirus lockdown should not be eased until ‘track and trace’ is a success, say government advisers