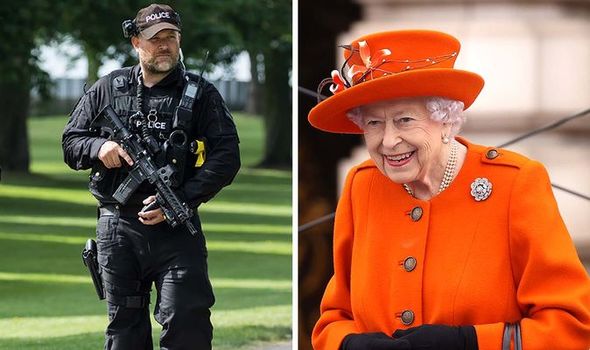 A 19-year-old was held after using a rope ladder to scale a fence at the castle where the Queen is spending the holiday. Armed police pounced after CCTV captured the raid at 8.30am ‑ within an hour of the Queen welcoming Prince Charles and Camilla to the castle. Scotland Yard said the intruder did not enter any buildings.

Thames Valley Police Superintendent Rebecca Mears said: “An investigation is ongoing and we are working with the Metropolitan police.”

There have been several breaches at Windsor this year. This month, a woman of 50 was arrested for banging on Prince Andrew’s car window.

In April, another woman, 43, wandered into the Royal Lodge after telling guards she had a lunch date with Andrew.

And two intruders were arrested in May after scaling fences around the lodge.

The crossbow teenager, from Southampton, was sectioned under the Mental Health Act yesterday.

Britain has martial law option under Brexit no-deal, but no plan to exercise it – secretary