Taking to Twitter commentator Dr Mos-Shogbamimu took aim at the “haters” who would see “how the world favours” the Duke and Duchess of Sussex. She said that “finding and loving each other” was the “best thing” to happen to the couple, who share two children.

Meghan Markle and Prince Harry were spotted smiling and holding hands as they arrived at the event to mark Nelson Mandela International Day.

Dr Mos-Shogbamimu said the display of affection proved the couple were not just married but “best friends”.

She told her 152,000-plus followers: “Huge honour for Prince Harry to speak at UN #MandelaDay2022. Let the haters see how the world favours them  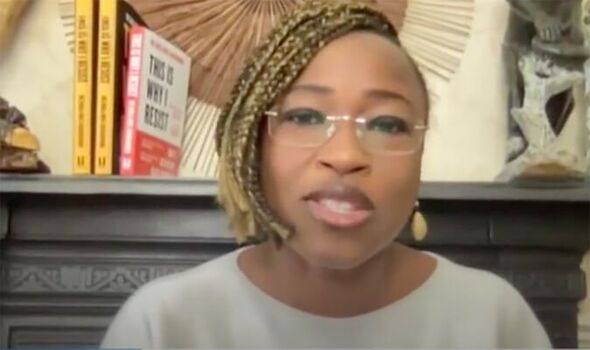 The Duke of Sussex has received backlash following his speech at the United Nations after he waded into US politics once again.

Prince Harry spoke on Monday about seeking insight from the late Nelson Mandela during a time of global uncertainty and urged countries to take action on climate change.

Accompanied by his wife Meghan, the couple held hands as they walked into UN headquarters in New York to mark Nelson Mandela International Day, held annually on the former South African president’s birthday.

In the UN General Assembly hall, Harry spoke about the threats from Russia’s invasion of Ukraine, what he called the reversal of constitutional rights in the US and the “weaponising” of lies and disinformation.

He said: “We are witnessing a global assault on democracy and freedom – the cause of Mandela’s life.”

Mandela became South Africa’s first Black president in 1994 after spending 27 years in prison during apartheid. He died in 2013 aged 95, but remains an icon for his struggle against apartheid and message of reconciliation.

Harry warned about the impact of climate change on Africa and the world.

He said: “This crisis will only grow worse, unless our leaders lead, unless the countries represented by the seats in this hallowed hall make the decisions – the daring, transformative decisions – our world needs to save humanity.”

The royal also spoke about a 1997 photo taken in Capetown of Mandela and his late mother Princess Diana, which he said hangs on his wall.

He added: “When I first looked at the photo, straight away, what jumped out was the joy on my mother’s face. The playfulness, cheekiness even, pure delight to be in communion with another soul, so committed to serving humanity.”

Harry described Africa as a “lifeline,” saying: “It’s where I felt closest to my mother and sought solace after she died, and where I knew I found a soulmate in my wife.”

But Harry was accused of “undermining the British Monarchy” by foreign policy analyst Nile Gardiner who said the duke of becoming “a mouthpiece for Meghan Markle’s far-left political activism”.

“A sad decline for a once hugely popular figure.

“He is actively undermining the British Monarchy by engaging in political attacks, and damaging the image of the Royal Family in America.”