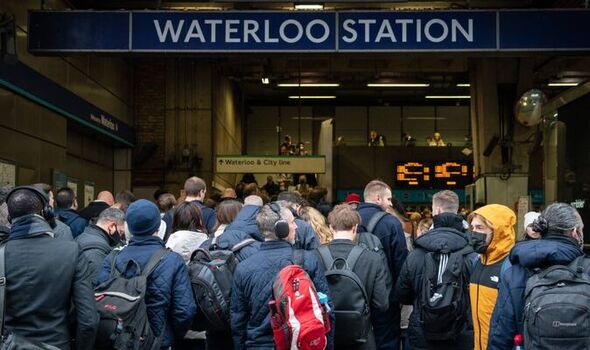 Around 10,000 members of the National Union of Rail, Maritime and Transport (RMT) walked out of London’s Tube system in a row over jobs, pensions and work conditions. They plan to hamper the return to offices again with a second day of disruption.

Tory MP Andrew Bridgen said: “At a time of national emergency as we emerge from Covid-19 and face worldwide security issues, the Tube strike is extremely damaging and self-indulgent.

“The strikers should remember how much taxpayers’ money has been pumped into keeping the Underground running during the pandemic.”

But more vehicles brought traffic to a halt, adding to commuter woes.

Builder John Rayner, 28, who was waiting for a bus in Paddington, west London, said: “I missed two buses because queues are so long and some buses don’t even bother to stop.

“I walked to Paddington for over an hour as I thought I would have more luck getting a Tube from here. It is a joke. This city is becoming unlivable.”

Tech firm TomTom said at 9am road congestion was 119 per cent, the highest figure for the capital this year. The figures represent the additional time needed for journeys compared with free-flow conditions.

Transport Secretary Grant Shapps tweeted: “I urge the Mayor of London & TfL to get this resolved + Union to call off Thursday’s counterproductive strike.”