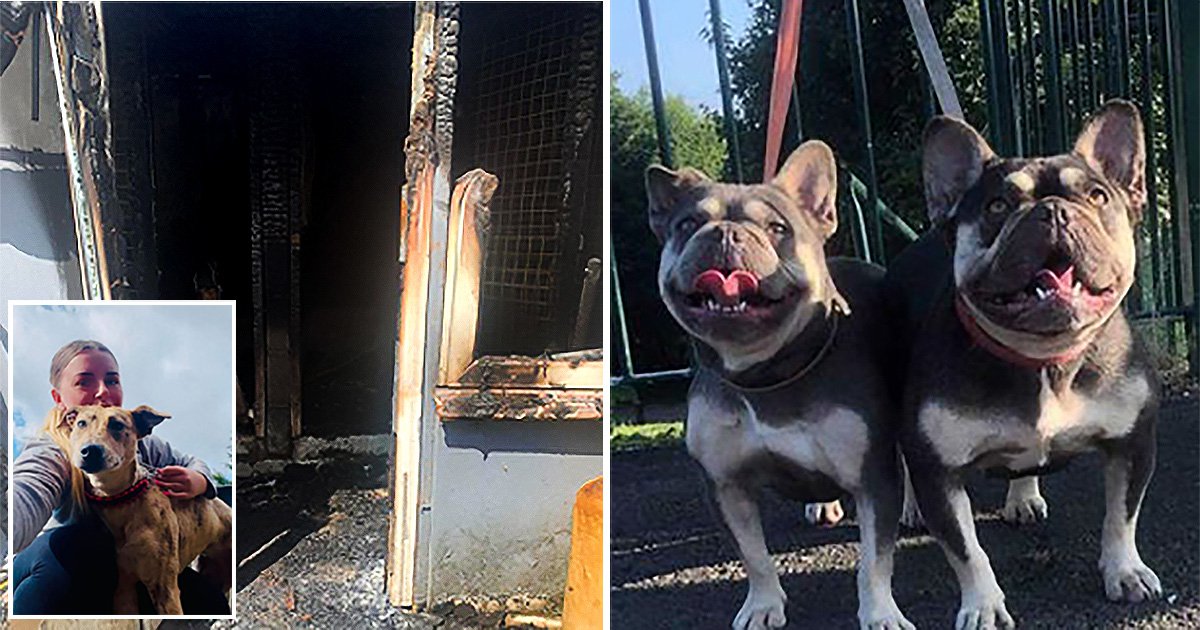 The owner of a family kennels woke in the night to hear the dogs barking, then rushed over to find them up in flames.

Emma Frowen, 42, was housing several dogs – including some belonging to friends – at an allotment close to her home in Rhymney, Caerphilly, Wales.

She said two French bull dogs, a pregnant cocker spaniel, a bull cross and three bull greyhounds were doused in petrol before being set alight.

The mum-of-three said: ‘We could see all the sheds where all the dogs were, flames as high as the house – and everything up in flames.

‘My son tried kicking the doors open, trying to rip them open, but he was burning his hands.’

Emma’s other son also attempted to run in and save the animals, but again was burned.

‘The fire brigade came and you could still hear the dogs screaming and yapping and then all of a sudden you couldn’t hear anything,’ Emma added. ‘They were all dead.’

One dog managed to escape, but suffered 80% burns and had to be put down.

Once the fire was out, Emma was given sheets and blankets to carry the dead dogs out of the destroyed kennels.

A joint investigation a the scene between South Wales Fire and Rescue Service and Gwent Police concluded the fire was started deliberately.

Emma said it was a ‘sick, vile attack’, adding: ‘It was horrendous, absolutely horrendous. My children are all heartbroken. We just haven’t got any words.

‘The police were crying as well – the lady sergeant. Everyone was just sobbing down there because they had never seen anything like it.

‘For someone to come and do that they need locking up because they are absolutely twisted and sick in the head.

‘There is something seriously wrong with people like that.

‘We just want them caught and put in prison and punished for what they’ve done. Until they are locked up and behind bars we don’t feel safe.

‘To be honest I don’t feel safe in my own house at the moment. Could they come and do it here? They’re just animals – absolute animals, those people.’

A spokesperson for RSPCA Cymru said: ‘We are very sad to hear about this upsetting incident and would urge anyone with information to contact Gwent Police.

‘Our thoughts are with the owners of these poor dogs during this distressing time.’

Emma Weymouth wedding snub: How Viscount’s own mother was banned from lavish wedding