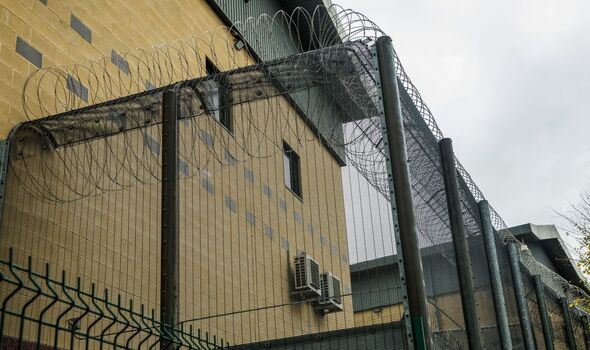 Other security guards were threatened with kidnap and murder as gangs of Albanians, Vietnamese and North Africans engaged in brutal “turf wars”.

Some brave refugees tried to keep the peace and protect staff as mayhem broke out at the Harmondsworth site in Hillingdon, west London.

But one staff member suffered a broken finger and others feared for their safety or were left feeling demoralised by the flare-up.

Full details of the riot are revealed for the first time in an official Home Office report obtained by the Sunday Express.

We can today reveal for the first time the full inside story of the terrifying violence faced by staff during clashes which erupted during a power cut last November.

Police were called in to investigate allegations, including one by a member of staff who claimed to have been sexually assaulted during the disturbance.

The dossier reveals that the centre’s managers asked the Home Office for permission to to evacuate the detainees after a loss of power and water supply, but this was refused.

About 100 of the 506 failed asylum seekers and foreign offenders awaiting deportation then started fires and rioted armed with makeshift weapons during the blackout.

Some migrants tried to help staff by “breaking up fights,” records newly released by the Home Office show.

But a timeline shows that during the chaos “threats to kidnap staff” were made followed by “threats to kill staff” less than half an hour later.

These documents have called into question a claim made by Immigration Minister Robert Jenrick that no one was hurt during the major incident.

He tweeted on the evening of November 5: “Thankfully no staff or individuals detained there were hurt, despite clear evidence of unacceptable levels of violence and disorder.”

But the official records show the most serious incidents, including the alleged sex assault, fires, criminal damage and threats of violence happened within hours of the Home Office refusing the request for the centre to be evacuated.

The first fire was started an hour and 40 minutes after this decision and the rioting began 15 minutes later, with property being damaged.

During the next three hours migrants threatened to kidnap and kill staff, and tried to start another fire.

This forced the terrified security guards to withdraw and lock themselves in offices.

A Home Office source said: “Mr Jenrick tweeted before the full scale of the incident was known and some of the alleged injuries were not reported until November 6, a day after his tweet.

“The earlier evacuation was halted because it would have taken all night to complete and it was felt at the time it could have led to more disruption, so it was best to wait until daylight hours when more staff were available.

“No weapons were used in any of the assaults (on staff) and the Met Police investigated all criminal allegations made during the disorder, including the alleged sex assault, but chose to take no further action.”

The incident had begun with a power outage at 12.02am on November 4 which affected Harmondsworth and the nearby smaller Colnbrook Immigration Removal Centre, both run by Government contractor Mitie.

According to minutes of an incident “cold debrief meeting” held in the Colnbrook boardroom on November 15, by about 9.15am there was a plan to evacuate the centre, but this was cancelled at 11am after it was wrongly believed all power was restored.

The minutes said: “At 10.55am on November 4 power was restored and the Colnbrook systems reacted well, however Harmondsworth’s didn’t.

“The Command Suite had been informed that full service had been restored and they were going around resetting everywhere.

“However, at 2.30pm it was reported that there was no power on the units and no water due to the water pumps failing.”

Staff tried to entertain migrants with a barbecue, the minutes said, but just after 3pm the centre requested evacuation again, which was refused an hour later.

The minutes recorded: “The second request made by yourselves due to the power having not been restored was too late for a safe evacuation as it would have been complete darkness.”

Some migrants became angry at being told to stay in their rooms until it was fixed and by 6pm began lighting fires and damaging property, so the police were called.

The documents quoted a member of staff as saying: “The concerted indiscipline escalated very quickly with the start of it being the fire in the courtyard.”

Another said: “As soon as darkness started it all happened very quickly and escalated.”

An employee added: “I made my way to where it was kicking off with a number of fights taking place.

“I initially spoke to (redacted), however (they) ended up being assaulted and three large groups of Albanians, Vietnamese and North Africans looked like they were having turf wars.

“There was no aggression at staff, it was very much resident on resident. There were four large black residents trying to help the staff by trying to split the fights up.”

One employee noted seeing “no real injuries” but said staff were “very anxious”.

Another said: “It was quite disjointed and demoralising. The next thing to try and do was to get staffing of some level back on to house.”

Some reported seeing injuries, with one saying: “I was deeply concerned for the duty shift manager already on shift due to a previous injury and then also got injured.”

Another said a colleague looked injured and “I didn’t expect her to carry on for the shift. Shortly after this staff were withdrawn.”

A staff member added: “There was no communication about unlocking the residents or when this would be taking place.

“I injured my hand trying to shut the door to contain residents.”

Police secured the perimeter of the site after windows were broken just after 10pm and another fire was extinguished at 12.11am on November 5.

At 1.38am the Home Office authorised evacuation with the first coach leaving at 11.22am.

It took more than 24 hours, until nearly 3pm on November 6, for all the migrants to be removed via coach.

Refugee Council CEO Enver Solomon said: “It’s deeply worrying that people were not promptly evacuated and it shouldn’t have happened.

“It’s already distressing for people in detention to be locked up with no release date in sight – it’s a terrifying and humiliating experience.

“Everyone deserves to be treated fairly, humanely and with dignity.”

A Home Office spokeswoman said: “Following a power cut at Harmondsworth on November 4 we saw unacceptable levels of violence and disorder.

“Home Office staff, contractors and officers from the prison service and the Metropolitan police worked tirelessly and professionally throughout the night to control the situation and ensure the quickest and safest evacuation of everyone staying there.

“The safety of staff and residents was the priority throughout our response to this power outage.”

Garda 'dragged along by a speeding car for 200 metres and repeatedly punched in the head', court is told