The former head of British Cycling, Shane Sutton, has stormed out of a tribunal after being accused of being a “serial liar” and a “doper with a doping history”.

Dr Richard Freeman claims that a banned testosterone substance he ordered to the headquarters of British Cycling in 2011 was at the direction of of Shane Sutton – the former head coach of Team Sky and British Cycling.

The accusations were made by Mary O’Rourke QC, who is representing Dr Freeman at a General Medical Council (GMC) tribunal which will decide if he can continue practising medicine.

In the opening hour of testimony, Mr Sutton had numerous angry exchanges with Ms O’Rourke.

He accused her of being a “bully” and at one point threatened to sue her for defamation if she did not retract comments calling him a “liar” and a “doper”, which she refused to do.

Mr Sutton also said he would be happy to take a lie-detector test to prove that he did not order the Testogel substance.

Dr Freeman, as a vulnerable witness, spoke from behind a screen so he could not be seen.

Mr Sutton said: “Tell Dr Freeman to take this screen down and look me in the eye.

“He won’t because he knows I didn’t order it (the Testogel). I’ve got no reason to lie. I classed him as a friend. He did a lot for me. I have no issues with Dr Freeman whatsoever.”

On the accusations of being a doper, Mr Sutton repeatedly denied ever having used testosterone, except for one knee injury in 1986. 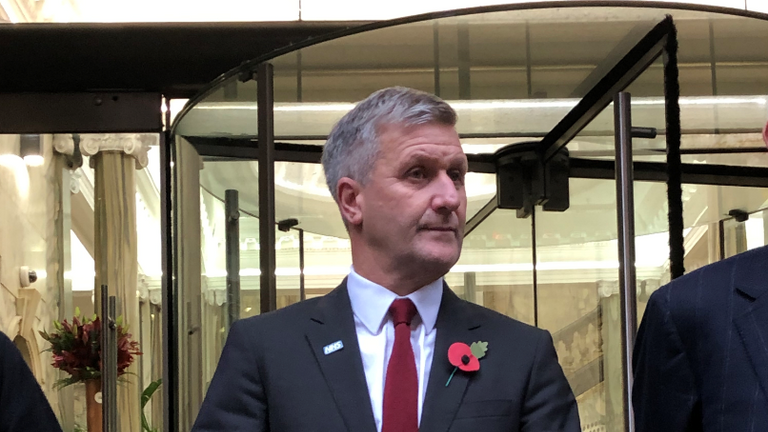 Officials could not persuade him return and it is unclear whether he will resume giving evidence.

He was due to give more evidence on Thursday.

Speaking to Sky Sports News outside the tribunal, Mr Sutton said: “It was tough. I want to go away and reflect on what was said and consider coming back on Thursday.

“I defend any allegations regarding the case. It was disappointing the way I have been singled out and feel like I am on trial.

“I need to go and talk to my family and discuss whether I return and give any more evidence.

“You’ve got everything I said in there, at the end of the day I know full well that I never made that order.

“(Ms O’Rourke) is an individual that does not know me and is trying to discredit me. It is quite upsetting that she can make accusations and there was nothing evidence-based in there.

“It’s quite sad that my son could pick up the paper and see his dad being accused of being a bully, when actually this lady has become the bully.”

The GMC claims that Dr Freeman obtained the Testogel in the knowledge or belief that it would be used to improve the performance of athletes.

He has already admitted ordering 30 packs of the gel to the headquarters of British Cycling, as well as saying he tried to cover up the order by asking Fit4Sport Ltd, the company that delivered it, to say it had been sent in error, returned and destroyed.

Queen’s heartbreaking dilemma over Prince Harry and his duties revealed