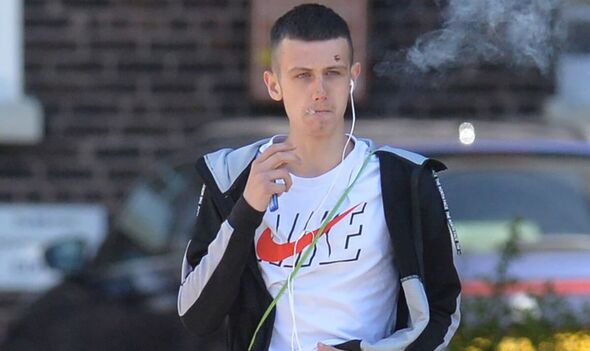 A convicted rapist has been jailed after chasing a schoolgirl down the street while brandishing a meat cleaver.

Shirtless Bradley Williams passed the girl in the street and asked for her age, the court heard.

She replied “15,” to which the 21-year-old responded “too young for me” before walking around the corner of Withington Road, in Fegg Hayes, Stoke-on-Trent.

However, the victim saw a car pull up next to the defendant and witnessed him pull out a meat clever from his tracksuit bottoms.

Williams then ran towards her, forcing her to flee until she came across a group of adults who called the police and her father, reports StokeonTrentLive.

Stoke-on-Trent Crown Court heard that Williams was handed a a two-year youth rehabilitation order in 2019 after admitting raping a child under the age of 13 and inciting a child to engage in sexual activity.

As part of the sentence, he was made the subject of a Sexual Harm Prevention Order (SHPO) which this incident put him in breach of.

Now Williams, of Withington Road, Fegg Hayes, has been jailed for two years after pleading guilty to possessing a bladed article in a public place and breaching his sexual harm prevention order.

Mr Ahuja said: “After the girl’s father arrived, she remained in the safety of other people and witnessed her father talking with the defendant on his door step on Withington Road.

“She said the defendant was waving the knife towards her father and making derogatory comments about her.

“When Williams ran towards her she said she felt fearful that he was going to use the knife on her.

“Police arrived a short time later and arrested the defendant at his home address. He was showing signs of being under the influence of alcohol or drugs.

“During a search of his house they found a meat cleaver inside a kitchen cupboard placed on top of a packet of crisps.”

In a victim impact statement, the girl said the incident left her feeling “petrified”.

Around an hour prior to the incident, police had been called to the defendant’s address after they received a phone call expressing concerns for his safety.

He explained to the officers that his mood was low due to having discovered that his partner was cheating on him.

Following his arrest, Williams denied having breached the terms of his sexual harm prevention order.

He said he had drunk a bottle of gin and had gone out to the shop when he saw the girl, but denied having the knife when he spoke to her.

He claimed the only time he had the meat cleaver was when he was on his door step after the victim’s father had hit him.

Mr Ahuja said Williams received a caution in December 2021 for breaching his sexual harm prevention order on two occasions and failing to comply with the notification requirements.

“I understand his biological grandad has been diagnosed with a terminal illness.

“He’s 21-years-old with a sad upbringing and an unusual breach that falls before the court. His recollection from that day is not clear because of what was going on.”

Sentencing Williams, Judge Graeme Smith said: “You were clearly suffering difficulties at the time, there were difficulties in your personal relationship that you discovered that day and you had taken either alcohol, drugs or both and this impacted on your actions which, when looked at, seem completely irrational.

“Not surprisingly, she was extremely scared and the long term impact is that she is now scared of going out in the street and no longer feels safe in her own community.”

Judge Smith also made a deprivation order for the meat cleaver.