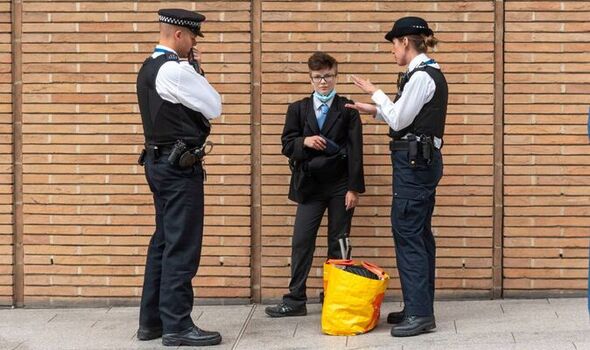 It was revealed in March that a 15-year-old on her period was strip-searched by police in 2020 after wrongly being suspected of having cannabis in school. The latest figures are for ­ Met Police officers between 2018 and 2020.

Iryna Pona, of The Children’s Society, said: “We are horrified. It is shocking that nearly a quarter took place without an appropriate adult present. Strip searches are intrusive and traumatic, and ­children are being ­completely failed if even basic safeguards are not in place.”

Data released by Scotland Yard showed 58 percent of the children were described as black. More than 95 percent were boys.

The charity said it is “concerned” by the over-representation of black children and how they are treated.

Ms Pona added: “We often support children who have been groomed and coerced into crimes like county lines drug dealing, only to be treated as adults who have made a wilful decision rather than offered support as victims ­of exploitation.”

Dr Halima Begum, chief executive of the Runnymede Trust race equality think-tank, said the data “underlines how badly our children are being failed by the state institutions there to protect them”.

She added that “traumatic” encounters where youngsters are criminalised would have an “unforgivable” impact on their wellbeing. These experiences form the main lens through which children view the police, and often their teachers too.”

A spokesman for London mayor Sadiq Khan said: “He has asked the Met to conduct a review of all strip searches of children to ensure lessons are learned and is committed to holding them to account on the improvements needed.”

Some 23 percent were done without an appropriate adult as is required by law except in cases of “urgency.”

That is usually a parent or guardian, but it can be a social worker or carer. More than two-thirds of these involved black boys.

Deputy Assistant Commissioner Laurence Taylor said it had “already made changes as we ­balance the policing need for ­this type of search with the considerable impact it can have on ­young people.”

Half of Britons boycotting Chinese goods as anger over coronavirus mounts