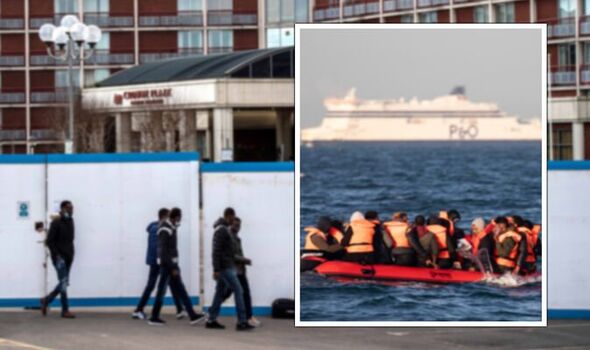 In a single five-week period between September and January, 57 migrants escaped and officials had no idea who they were, the Independent Chief Inspector of Borders and Immigration said. David Neal said biometrics “such as taking fingerprints and photographs, are not always recorded.” Union officials even told inspectors they are “concerned they cannot meet the country’s national security requirements” due to lax processes.

Some migrants have even arrived in England with guns and knives, Mr Neal revealed, prompting fresh calls for proper security checks to be carried out.

Critics today warned that failing to take the biometrics of every person who arrives after crossing the English Channel endangers national security and encourages people trafficking gangs.

Mr Neal, in the long awaited report, said information on a migrant’s identity is reliant upon the data they themselves provide.

In some instances, migrants are asked to put their details into the Immigration Enforcement Database themselves.

And they indicate how old they are by pointing at a sign.

The report added: “Others highlighted the lack of traceability of the migrant, from both national security and vulnerability perspectives.”

Mr Neal highlighted how migrants have just walked out of hotels used to house asylum seekers while their claims are processed.

Mr Neal revealed: “The Home Office told our inspectors that 227 migrants had absconded from secure hotels between September 2021 and January 2022, and not all had been biometrically enrolled.

“Over a five-week period alone, 57 migrants had absconded – two-thirds of whom had not had their fingerprints and photographs taken.

The Home Office confirmed 21 migrants all fled from the same hotel and the other 36 out of the 57 assessed by officials fled from six other hotels.

Migrants who absconded did so on average 16 days after their arrival in the UK.

But some went on the run within four days of arriving, Mr Neal said.

Shadow Home Secretary Yvette Cooper said: “It is flabbergasting that Ministers haven’t made sure basic fingerprints and biometrics are being taken from everyone who arrives. When people can arrive and disappear without any biometric checks that puts national security at risk and encourages criminal trafficking gangs.”

The inspection’s findings exposed gaps in security procedures and concerns that vulnerable migrants were left at risk.

Equipment for security checks was “often first-generation and unreliable”, the report revealed.

Mr Neal added: “Stakeholders raised concerns about the adequacy of searching, highlighting incidents where migrants still possessed weapons after they had been searched.

“Inspectors noted that, when migrants were returned to the waiting area after being searched, there were limited controls to prevent them encountering migrants who had not been searched.

“Officers removed and placed weapons in a sharps bucket in the search area.

“Officers said that migrants sometimes had pocketknives, but not often, and that guns had been encountered, though rarely.”

More than 15,000 people have reached the UK after navigating busy shipping lanes from France in small boats such as dinghies since the start of this year, according to provisional Government figures.

Mr Neal said: “A new model for borders and enforcement is desperately required if our border is to be secured and vulnerability effectively addressed.”

He said “prolems arose mainly due a ‘refusal’ by the department to move from an emergency response to what has rapidly become steady state, or business as usual”, adding: “It is in the gift of ministers and senior officials to deliver an effective response.”

The Home Office insisted it has already “transformed” how it deals with migrants arriving on the Kent coast since Mr Neal’s inspection, and work carried out to address his recommendations for improvement has almost been completed.

A Home Office spokeswoman said: “Since the inspection took place, we have transformed how we manage the arrival of migrants making dangerous and unnecessary Channel crossings in small boats. This includes the previously planned closure of Tug Haven and the movement to a two-site operation at Western Jet Foil and Manston.

“We have accepted all the report’s recommendations, the majority of which were already being addressed at the time of the inspection, and almost all this work has already been completed.”

Mr Neal will carry out another inspection later this year.