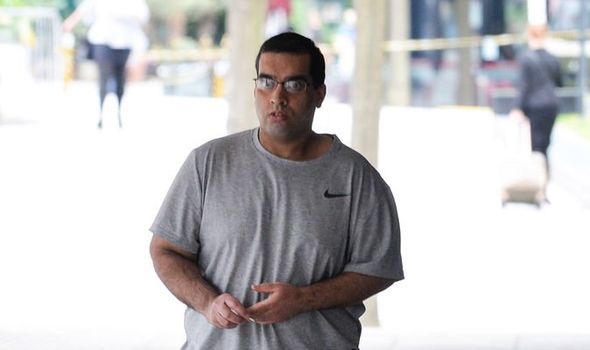 Mohammed Iqbal, 33, hit the victim over the head with a glass bottle and an accomplice ran him over during the “disgraceful” incident. However, the violent shopkeeper was spared jail yesterday at Manchester Crown Court.

The court heard the victim had been into the convenience store and had tried to buy beer, but a bank card did not work. Iqbal accused him of “messing about” and asked him “are you taking the f****** piss?”

The victim said he believed the card belonged to his friend. He left the shop, and shortly after a car pulled up near him.

Iqbal and another man, who has not been identified by police, got out in Miles Platting, Manchester.

The court heard Iqbal hit him over the head with a glass bottle, telling him: “What are you saying now you cheeky c***?”

The driver got out and hit him over the head with a police baton, Manchester Evening News reports.

The victim tried to run away but he was pursued by the car.

Andrew Mackintosh, prosecuting, said the victim was hit by the car, causing him to “fly into the air”.

Shortly after he was then kicked in the mouth, but didn’t see who was responsible. The car then sped off.

He admitted being the passenger in the car and hitting the victim over head with the bottle, which did not smash.

The victim was later found to have suffered a fractured pelvis and ankle, injuries thought to have been inflicted in the collision on April 12, 2019.

You decided to pursue him, I am satisfied, in order to exact some sort of revenge for the grievance you felt

The victim had to wait more than two years for justice but Iqbal walked free from court. He was sentenced to 15 months in prison, suspended for 18 months.

He must also complete 200 hours of unpaid work and 40 rehabilitation activity requirement days, and was ordered to pay the victim £200 in compensation.

Sentencing the yob, Recorder Sarah Johnston said Iqbal had made a “gross and dangerous overreaction”.

She told Iqbal: “You decided to pursue him, I am satisfied, in order to exact some sort of revenge for the grievance you felt.

“This can only be described as a premeditated and serious assault.”

The court heard Iqbal, from Ancoats, Manchester, has caring responsibilities and has kept out of trouble since the incident.

Saul Brody, defending him, said: “This was clearly an incident which could and should have been avoided entirely.

“There are other ways of dealing with flash-point situations like this, the defendant bitterly regrets his involvement.”

“It was a hot-headed reaction rather than a cold-blooded one, if I can put it that way,” he said.

The driver’s identity was unknown to the police, the court heard.

Two teenagers arrested after boy, 16, stabbed to death near school in Luton

M25 closed after crane flips over and smashes through central reservation