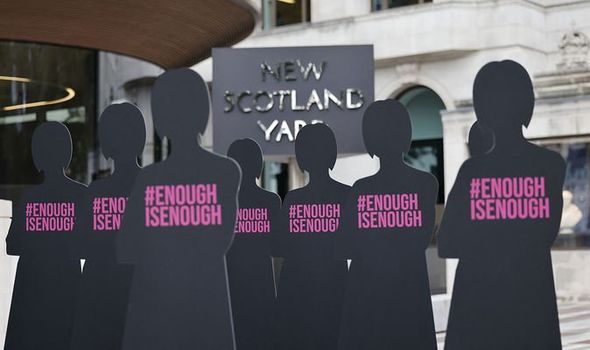 The cut-outs, of those killed since 2009, also represent married nurse Claire Parry, 41, who was killed by her policeman lover in May last year and Natalie Esack, 33, who was murdered by her estranged former police cop husband in May 2012.

In a last act of defiance outside the Metropolitan Police headquarters New Scotland Yard in London, the women have turned their backs on the organisation whose officers serve to enforce the law, not abandon it.

Enough is enough was written across their chests in garish pink by the domestic abuse charity Refuge who on Thursday October 7 launched a campaign of the same name.

Ruth Davison, chief executive of Refuge, said she felt fury after learning Couzens “used his powers and the public trust we as women have in him” to falsely arrest Sarah then rape, murder and burn her body.

She said: “The fury that I think we all felt, that so many other women felt, was just overwhelming. We developed this campaign over the weekend. Me and my colleagues said ‘enough is enough’. Those are the words of Priti Patel, our Home Secretary and we agree with her. Enough is enough, but words are not enough.”

Refuge believes the Home Secretary has “a real opportunity” to take action in the Police, Crime, Sentencing and Courts Bill, which returns to the House of Lords on October 20.

The Bill contains a proposed new serious violence prevention duty, which requires police and other public bodies to work together to prevent and tackle serious violence.

But as the Bill currently stands, the definition of serious violence in the prevention duty does not explicitly include domestic abuse, domestic homicide or sexual violence ‑ something Refuge wants to change.

The gaps in between the figures may appear empty but are filled with the tales of unreported abuse, such as instances where police officers have gone above and beyond by coercing or harming, instead of protecting.

Countless women have fallen victim to rogue officers but they never paid the ultimate price of losing their lives.

Instead these survivors pay through the unrelenting and daily fear that plagues them.

Ruth said not all police officers are like Couzens but questioned how women are expected to trust the police.

She said: “We already know that only one in five of the women that we support as Refuge ever report the crime they face to the police because they don’t have confidence they’ll be taken seriously.”

Baroness Helena Kennedy QC, a patron of the charity, said: “We’ve had these moments of real anger by women about the ways in which violence against women has been policed. And so I do think that we have to be putting this into a statutory form. And the opportunity has now arisen because there’s a policing bill.

“There isn’t a woman who can’t tell you have experiences they’ve had, where they’ve been abused, or been at the receiving end of abusive behaviour or threatening behaviour, and where they haven’t felt fear. And so that’s, that’s the shocking part of all of this.”

Jo Brand, a comedian and ambassador for Refuge, added: “I think there are certain professions like the police or nursing where you cannot afford to have any bad apples at all. So your standards need to be different and you need to be policing it much better.”

Musician born in UK given 14 days to leave the country