Home » Europe » Sir David Amess death: Murdered MP recently wrote attacks on politicians ‘could happen to any of us’

Murdered MP Sir David Amess had recently written about the risk of attacks on parliamentarians, admitting “it could happen to any of us”.

His book, Ayes & Ears: A Survivor’s Guide to Westminster, was published in November and was nominated for the Parliamentary Book Awards.

The fatal stabbing of Sir David on Friday afternoon during a surgery at Belfairs Methodist Church in Leigh-on-Sea has been declared by police a terrorist incident.

In the book, the member of parliament for Southend West wrote about the terror-related murder of Labour MP Jo Cox and how she had been attacked “in the most barbaric fashion imaginable”.

He said attacks such as that on Ms Cox had “spoilt the great British tradition” of the voters meeting politicians.

Another attack he mentioned was that on his colleague Nigel Jones, in 2000, in which Mr Jones’ aide Andy Pennington died trying to protect him.

While writing he had been on the receiving end of “nuisance from the odd member of the general public”, he admitted most MPs had changed the way they mixed with voters, and that Commons authorities took the threats to members very seriously.

Sir David wrote that MPs were issued with advice on safety for themselves and their families.

On the attack on Mr Jones, Sir David said: “We all make ourselves readily available to our constituents and are often dealing with members of the public who have mental health problems, it could happen to any of us.”

About security, he wrote: “We regularly check our locks and many others have CCTV cameras installed but probably the most significant change has been with constituency surgeries.

“The British tradition has always been that members of parliament regularly make themselves available for constituents to meet them face to face at their surgeries.

“Now advice has been given to be more careful when accepting appointments. 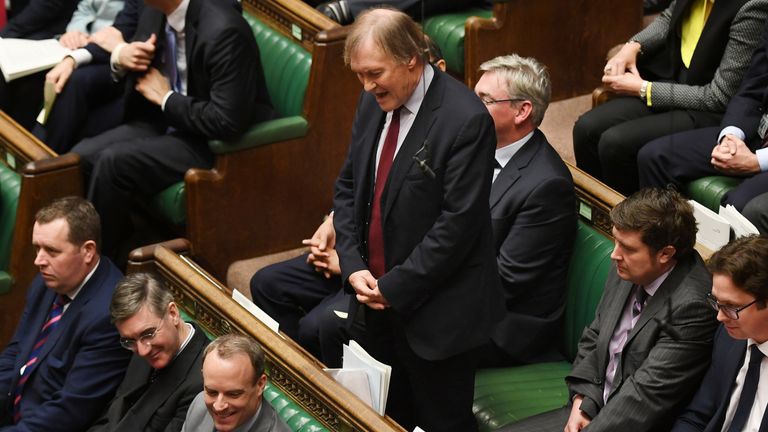 “We are advised to never see people alone, we must be extra careful when opening post and we must ensure that our offices are properly safe and secure.

“In short, these increasing attacks have rather spoilt the great British tradition of the people openly meeting their elected politicians.”

Sir David also said he was frequently abused online, and how easy it was for “ignorant cowards” to remain anonymous.

He said: “The law in this regard needs to be changed and updated as a matter of urgency.”

He was seen at a number of book signings in the last year promoting the work, the royalties of which went to a number of his favourite causes.

The book was also promoted by his local library service when it became available.