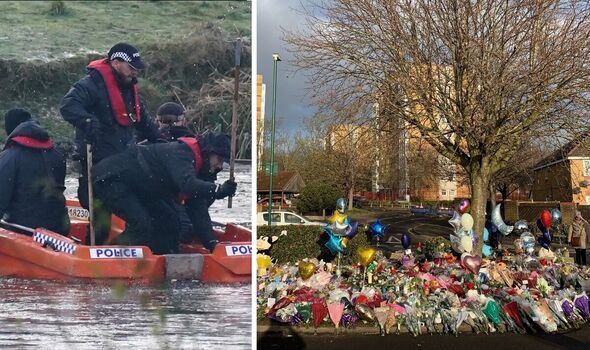 A six-year-old boy has become the fourth child to die after falling into an icy lake in Solihull on Sunday, West Midlands Police has said. In a statement following the death of the child, the force said: “It is with heartfelt sadness that we have to report this afternoon, the six-year-old in hospital has lost his fight for life.”

The statement continued: “Our deepest sympathies are with the families and friends of those involved in this tragedy. We cannot comprehend the enormity of the pain they must feel and our hearts go out to them.”

It comes after tearful police officers were applauded by the public as they laid flowers near to where the boys died after falling into an ice-covered lake.

A group of 21 officers from West Midlands Police’s Chelmsley Wood neighbourhood policing team marched to a makeshift shrine, which has grown up near Babbs Mill Lake in Kingshurst in Solihull in the days since the tragedy on Sunday.

The tight-knit local community remains in shock since news broke on Monday that three boys – aged 11, 10 and eight – had died after being pulled from the water. The fourth boy to die had been fighting for his life in hospital.

A relative of one of the boys who died spoke on Tuesday of the unimaginable pain faced by the youngsters’ families.

The aunt of 10-year-old Jack Johnson, who is reported to have been trying to save others who fell into the water, used a social media post to thank members of the community for their support.

Charlotte McIlmurray described the tragedy as a “nightmare”, adding “that two families can’t wake from the pain is unimaginable”.

She added: “He (Jack) was my nephew, so I know the pain is a million times worse for their moms, dads, sisters/brothers”.

Bunches of flowers left near the scene included tributes from the emergency services, the NHS, local politicians, Marston Green FC and friends of the boys.

England international Tyrone Mings has also visited the makeshift memorial to the boys, saying “we feel that pain”.

The centre-back said: “It was a personal decision to pay our respects. I think it’s impacted the whole city.

“We felt it was important to come down on a personal level just to show that support. Sometimes, as we’ve seen with other things that have happened across the city, there are things more important than football.

“We felt it was important to come down here, show our respects and show we were thinking about everything that has happened and the parents that are affected by it. We feel that pain too.”

Emergency services were first called to the scene at 2.36pm on Sunday, when it was reported four children had been playing on the ice and fallen through into the lake.

Members of the public and police officers initially went into the chilly waters to try to get the youngsters out, before the children were reached by specialist water rescue-trained firefighters who got the group to safety.

Those pulled from the water were given immediate life support by ambulance and fire service personnel before being rushed to two Birmingham hospitals – Birmingham Children’s and Heartlands – where they had all arrived in critical condition.

Superintendent Richard Harris, of West Midlands Police, said on Tuesday: “Police officers did go into the water. They were joined by other members of the other emergency services. Some of the officers went in waist deep.

“One of my officers was trying to punch through the ice to actually rescue the children themselves. That officer as a result of that had some mild hypothermia yesterday. I’m pleased to say that he’s now been released from hospital and he’s absolutely fine.”