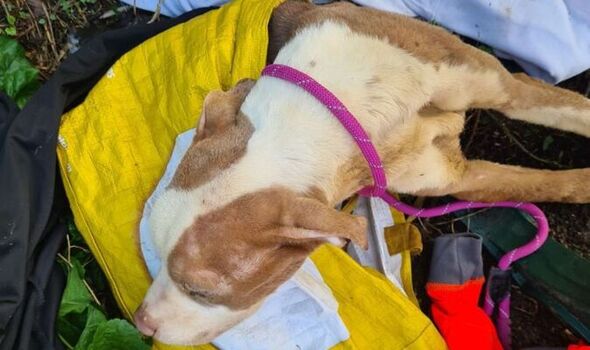 The bull terrier, which rescuers have named Monty, was found on Tuesday, September 6, in a park in Vermont Grove, Peterborough, and immediately rushed to the vets. He was given medication and placed on a drip, but his condition remains critical.

Monty was found extremely underweight, with sores covering his body and all of his ribs showing, reports Cambridgeshire Live.

The pup, who is believed to be around one or two-years-old, was treated by vets at the Pengelly and Mizen Veterinary Surgeons who alerted the RSPCA about the discovery.

The animal welfare charity is now investigating the circumstances of his abandonment and is appealing to the public for information. 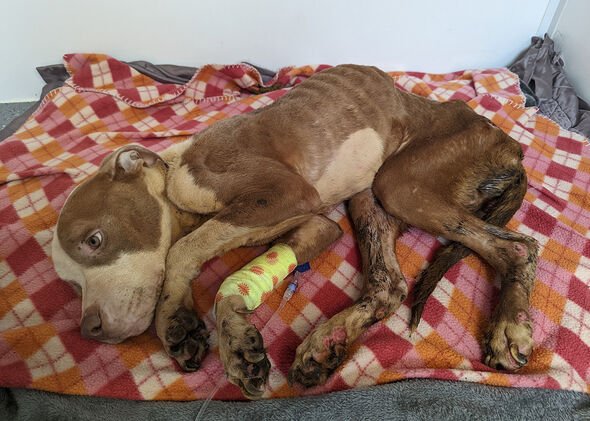 Monty was discovered at around 7am on Tuesday morning and has brown patches around both ears. RSPCA investigator Justin Stubbs said that he is hoping someone will recognise the dog and contact the charity’s appeals line.

He said: “I was horrified to see the condition in which this dog had been abandoned – he looked like he was just hours from death and he was just skin and bone. It made me feel sick. I just cannot believe someone could be this cruel to just abandon a dog in such a poor state.

“He was inside a bag like a piece of rubbish – it is truly shocking. The vets have named him Monty and I am just hoping that he will be able to pull through – but only time will tell.

“He has been bathed, is on a drip and medication, and being given the best care by a dedicated and already emotionally involved team of vets and nurses. I am keen to find the person who did this and I am hoping someone may provide me with information about this. I would like to hear from anyone who recognises Monty – somebody must know who owns him.

“This comes at a time when the RSPCA is busy asking for public support by donating to its Cancel Out Cruelty campaign so we can continue to help animals and investigate those responsible for such awful attacks. This sad incident reminds us why this campaign is so important.”

Will Meghan Markle and Prince Harry be invited to Brooklyn Beckham wedding?

Baby Sussex: All the details, as they emerge