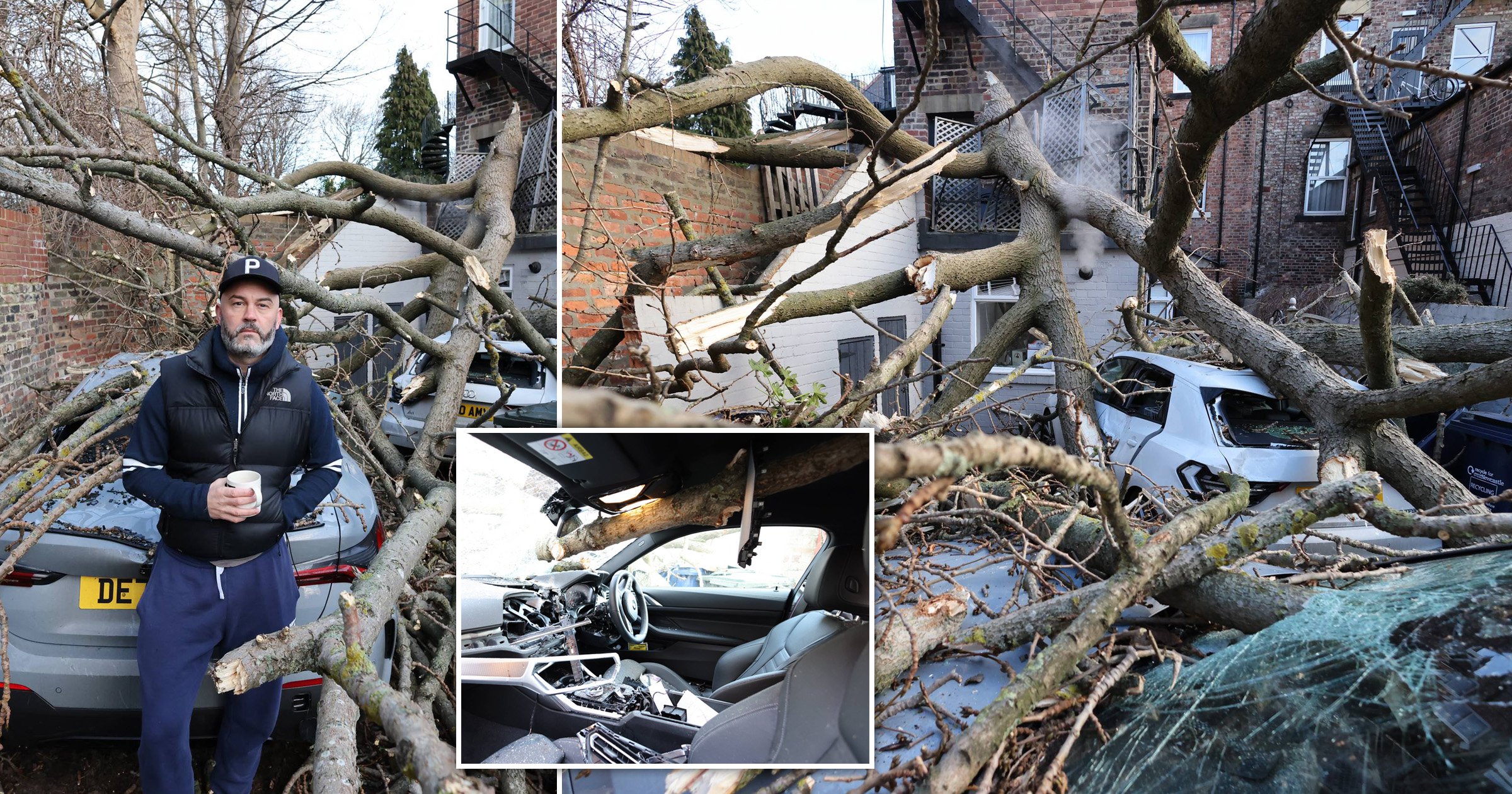 A Sky Sports presenter had a lucky escape after a huge falling tree crushed both of his cars and part of his house.

Keith Downie said the noise of the tree was like an ‘earthquake’ when it came down at his home in Newcastle yesterday during strong winds in Storm Malik.

It happened just as he was about to move his £42,000 new BMW, which had had only owned for three months, as well as his Audi.

The presenter, who covers the North East of England for the TV station, said: ‘Next door to my house is a big block of flats and an oak tree which must be around a 100-years-old.

‘I could hear the wind and I looked out the window of the en-suite which looks out on the driveway.

‘I thought I better go out and move them while the winds were getting up, as a few branches came off during the last storm, but as I looked out I heard this huge noise.

‘For a split second I wondered if it was an earthquake – the noise was incredible – but then I realised it was to do with the tree.

‘I ran for cover because the pressure of the tree caused the windows of the en-suite to smash and the glass shattered over me.

‘I couldn’t get out the back because it was blocked so I walked through the front of the house and I could see both cars were completely obliterated.’

Keith had been due to travel to Middlesbrough’s Riverside ground to cover their home match with Coventry City in the afternoon but had to change his plans as he was so shaken.

He shared pictures of the wreckage to his 150,000 followers on Twitter, saying he was fortunate not to have been inside.

‘The tree has landed directly on the house where I was standing just a few yards away,’ he added.

‘A huge trunk of the tree has pierced through the windscreen and it’s almost come out of the other side where the driver would sit.

‘I was going to get a taxi down to the Middlesbrough game but I was shaken so badly that I couldn’t even talk properly.

‘I feel a bit more calm today but I woke up this morning and was desperately hoping it was a bad dream.

‘At the moment I’m frustrated and angry that my pride and joy has been smashed up but it’s also my office for work.

‘But in a couple of days I think it’ll sink in and I’ll realise that I’ve actually cheated death.’

Keith is due to be covering Newcastle United’s busy transfer deadline day tomorrow, so it happened at a bad time.

‘Tomorrow is my busiest day of the year, I’m usually on the road for 16 hours and my car is my office but it’s currently stuck underneath a 100ft oak tree,’ he said.

‘The car insurance won’t give me a courtesy car until they can salvage my car but they can’t salvage it until they remove this massive oak tree.

‘Tomorrow I’m doing deadline day and I’ve not got an office, so I just have to wait. I’m trying to see if I can get a hire car.’

Storm Malik has caused serious disruption over the weekend, with three deaths linked to it including a lorry driver who veered into the wrong carriageway on a motorway.

The strong winds were so powerful they ripped an entire roof off a house in Gateshead, while thousands of homes could remain without power for much of the weekend.