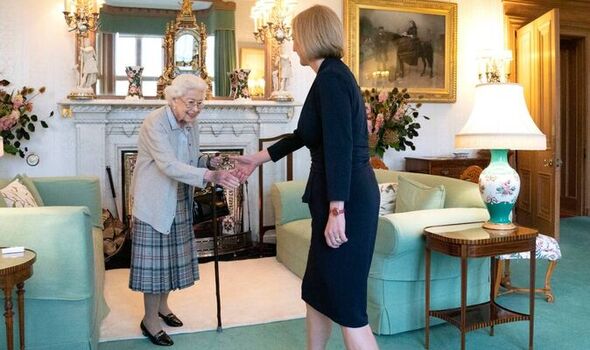 It was a break with tradition enforced ­by ­courtiers’ worries over her “episodic” mobility problems.

In her 70 years on the throne, the Queen, whose first prime minister was Winston Churchill, has seen many leaders come and go.

So there was no sense that the turmoil that has beset the Conservative Party in a long summer leadership contest had left her fazed.

Leaning on her now familiar walking stick, she smiled broadly as she waited for ­Ms Truss to come in.

She greeted her warmly with a handshake in front ­­of a roaring fire beneath ­the mantelpiece in the ­castle’s drawing room, to turn yet another page in our nation’s history.

The Queen, dressed in a grey cardigan, pale blue blouse and tartan skirt, asked the winner of the Conservative leadership contest to form a new Government.

In a statement, using the traditional language for ­ such moments, the Royal Household said: “The Queen received in audience The Right Honourable Elizabeth Truss MP today and requested her to form a new administration. Ms Truss accepted Her Majesty’s offer and kissed hands upon her appointment as Prime Minister and First Lord of the Treasury.”

There was, in fact, no kissing of hands. A handshake is deemed sufficient these days.

The Queen seemed in no discomfort although her right hand was bruised, a regular sight these days and usually the result of broken blood ­vessels. There have been concerns for her health after the change in plans for the venue of the changeover of government.

She had not been seen in public since July but appeared in good humour and, just before Ms Truss’s arrival, commented on the dark skies above her Scottish home.

The two Elizabeths sat talking on pale ­green couches for around 35 minutes, overlooked ­by a painting by Sir Edwin Landseer of Queen Victoria. 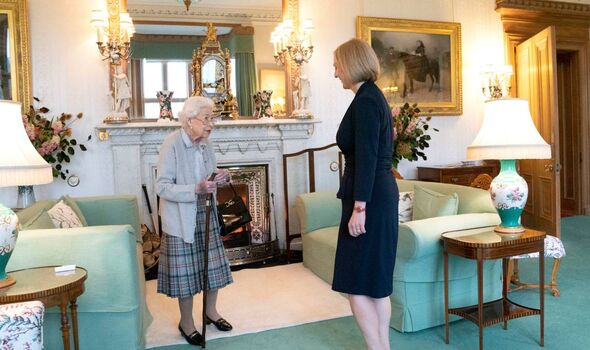 Ms Truss’s husband Hugh O’Leary, an accountant who wants no prominent role at his wife’s side in her official life, joined them for the ­
last five minutes.

Outside there were thunderstorms and heavy rain as a small group of journalists and royal aides watched the comings and goings.

A curling stone propped open one of the doors of Balmoral’s entrance, in contrast to the formality of the reception hall, which was lined with stuffed deer heads. Mist had delayed the couple’s arrival at Aberdeen airport on an RAF plane from Northolt, west London, by 10 minutes. 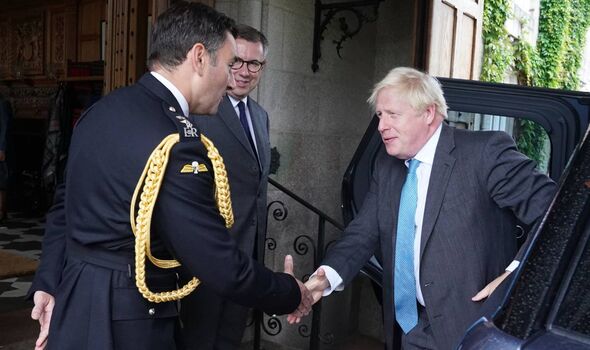 This had meant that for a short while the United Kingdom had no prime ­minister as Ms Truss’s predecessor, Boris Johnson, sped away from the castle while courtiers waited for the arrivals to appear.

Mr Johnson, accompanied by his wife Carrie, spent half an hour at his last ­audience with the monarch before returning south.

Sir Edward, 55, was joined in his hosting duties by the Queen’s equerry, Lieutenant Colonel Tom White, in welcoming and saying goodbye to the ­outgoing and incoming prime ministers.

Critics complained that the two premiers had travelled up to Scotland and back separately, doubling the carbon emissions of their journeys.

They travelled to their Balmoral appointments on two French-made Dassault 900LX jets, which the RAF bought for a combined ­£80million to replace four British manufactured BAe 146 ­aircraft that were retired earlier this year.