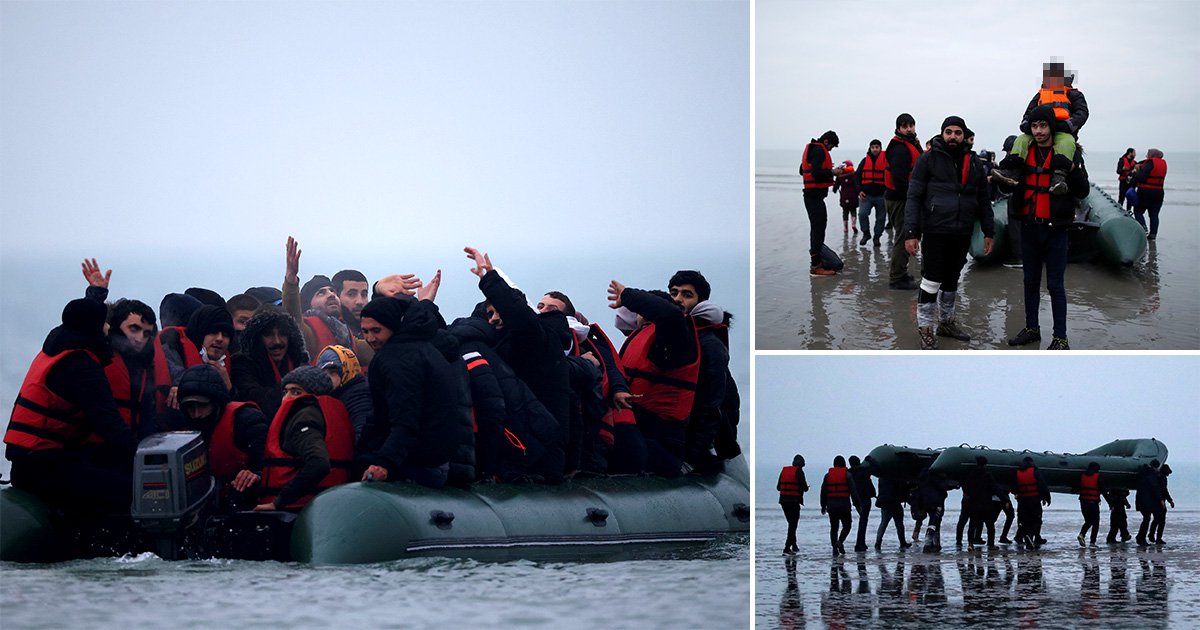 A callous people trafficker shot a man in the kneecaps after he refused to board a boat destined for the British coast.

Volunteers in the Calais jungle camp rushed to the aid of the 20-year-old victim, who was ‘quickly losing a lot of blood’.

The smuggler is said to have become frustrated at his refusal, feeling he had ‘lost out on easy money’.

Gangs smuggling people across the English Channel are thought to only receive their full fee once the person has arrived in the UK.

Medics took the man to hospital for treatment, and the assailant is now on the run, the Telegraph reports.

After returning to the camp, volunteers were told the news that 27 people had drowned making the perilous crossing after their boat capsized that same night.

Charles Devos, a lifeboat volunteer in Calais, described the ‘traumatic’ moment he had to pull numerous bodies from the sea.

He told Sky News: ‘It’s very, very shocking. It was a bit like the film Titanic when you saw all these people plunged into the water, drowning, with no means of being able to be rescued.’

Among those killed on Wednesday night were three children, 17 men and seven women – one of whom was pregnant.

Many of them are believed to be Kurds from the Peshdar region in Sulaimani province, northern Iraq, alongside Iranians and Afghans.

Prime Minister of the autonomous Kurdistan Region of Iraq, Masrour Barzani, said he was ‘deeply saddened’ to hear of the deaths.

There is currently an exodus of people from the area, driven away by political corruption, unemployment and little in the way of opportunity at home.

‘I’ll do what I need to. If I stay here I’m going to drown in debt anyway,’ a recent graduate from a university in Sulaymaniyah told the Guardian.

Kurds from the town of Ranya are said to make up a disproportionate number of those travelling to Belarus in recent weeks with the aim of crossing the Polish border into the EU.

As thousands of people continue to leave – particularly from younger generations – Prime Minister Barzani denied they are making the journey through Europe out of desperation.

Speaking at the Middle East peace and security summit in the city of Duhok last week, he said: ‘Unfortunately, it looks like that these people have been exploited by a number of people, let’s say “travel agents”, human traffickers, some political merchants, if I may say that, and of course some people from within Belarus as well.

‘These people did not leave this area under any sort of pressure, and they were not legally pursued, or imposed with any restrictions on their travel, so most of these people travelled freely on their own will through airlines and official channels. Many want to go to Europe in search of a different opportunity.

‘It’s not a flight of desperation. I hope the world knows that these people went there like every other immigrant wants to travel and go in search of different opportunities in different parts of the world. But if they want to return, they can always return here.’

So far five people have been arrested in connection with Wednesday’s tragedy, French police said.

It is the biggest single loss of life in the Channel since The International Organization for Migration began collecting data in 2014.

It’s feared the boat – described as a ‘floating death trap’ by rescuers – could have collided with a container ship when it sank.

Commuters in traffic chaos as heavy rain and wind continue