Sky News has learned that SNP guidelines were breached in the contest involving Roza Salih, a Kurdish refugee.

She was aiming to be the first refugee elected to Holyrood but lost in the party’s contest to be candidate for the Clydebank and Milngavie constituency.

Supporters of Ms Salih say a breach of the rules unduly influenced the selection process and they have accused senior SNP officials of failing to properly investigate.

One has told Sky News that an appeal to First Minister Nicola Sturgeon to overturn the result went unanswered.

The selection battle was eventually won by Marie McNair who went on to win the Clydebank and Milngavie seat for the SNP in last week’s election. 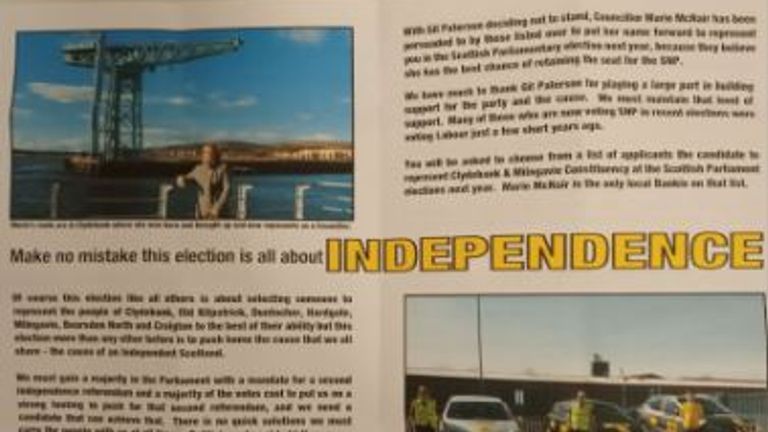 She is among Holyrood’s new cohort of MSPs sworn in on Thursday.

The rule breach occurred during the candidate selection process last October in the Clydebank and Milngavie constituency, which comprises different SNP branches – Clydebank, Bearsden North and Milngavie. On the eve of the ballot, Clydebank members posted out a leaflet in support of Marie McNair.

It contravened the SNP selection rules, which don’t permit written materials to be delivered to party members.

The leaflet read that it had been produced by the “Clydebank Members Group for Marie McNair” and listed 21 names including an MP, several councillors and SNP branch officers.

Ray James, vice-convener of the neighbouring Bearsden North branch, contacted SNP headquarters to complain. In an email response Angus MacLeod, the party’s national secretary, told him: “That leaflet should not have been distributed. It has no part in the selection contest. It is not sanctioned and it rides roughshod over the spirit of an open selection contest.”

He added: “Any nominee who undertook to contact members in this way would find themselves subject to sanctions, up to and including their removal from the selection contest.

“After investigation, I am unable to find evidence to suggest that Marie McNair played a part in the commission, production or distribution of this leaflet. Those claiming responsibility for the leaflet maintain that Marie was not told of their intentions.

“Therefore, I have no basis on which to sanction Marie and the selection process will proceed as planned.” In his email, three days before the selection ballot closed, Mr Macleod added that if any party felt “unduly influenced” by receipt of the leaflet, it could be arranged for them to re-cast their vote.

“The selection process should have been re-done. It was a serious, serious mistake.”

“It’s not enough to invite people to change their vote a couple of days short of the deadline, the damage had already been done. The 21 names on that leaflet were well-known, local figures, and it conveyed a strong message with no regard for the rules whatsoever.”

“It put all the other candidates at a disadvantage but what I didn’t like, in particular, was the ‘vote Marie, she’s from here’ theme.

“Now, I get that’s relevant in local politics and I’m not suggesting that it was meant to do anything other than strengthen Marie’s local credentials, but when your main rival candidate, Roza, is a refugee and someone whom we want to feel welcome wherever she goes, then I think we need to work a bit harder at being sensitive and inclusive.”

“The ethics of the party and its elected members need to be beyond reproach. We, the party members on the ground, are the gatekeepers of democratic representation. We present the candidates to the public to represent them. If that process is flawed, then that’s a serious deficiency.”

“She could have brought a wealth of experience on the parliamentary case work that she does day in and day out, combined her vast campaigning experience.”

Mr James, 67, says he wrote to first minister Nicola Sturgeon to ask that the result be overturned, and Ms Salih be installed as the SNP candidate, but that he received no reply.

He has written repeatedly to the SNP to query the circumstances under which access was gained to party members details for the purposes of sending out the leaflet and to ask for confirmation that there was no data protection breach.

Subsequent to her defeat in the constituency selection process, Ms Salih was selected to stand for an SNP ‘list’ seat in the Glasgow region and was joined on the campaign trail by Ms Sturgeon. Ultimately, however, she failed to win election to Holyrood.

As a 12 year-old, Ms Salih fled to Scotland with her family from Kurdistan.

As a teenager, she was one of the so-called “Glasgow Girls” who campaigned against Home Office dawn raids against asylum seekers. Their story was subsequently turned into a theatre production.

Sky News asked the SNP a number of questions, including whether or not the rule breach had involved a breach of data protection in accessing party members details.

An SNP spokesperson said: “On becoming aware of a breach of the rules, the national secretary investigated the matter and it became clear that Marie had no involvement.

“Local members were informed of the breach of the rules and were offered the option to recast ballots. Marie was delighted to win the support of 47% of the constituency vote last week.”