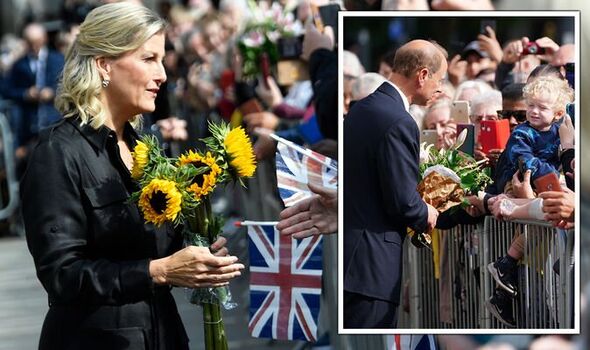 The Earl and Countess of Wessex will travel to Manchester today where they will light a candle in memory of the Queen at the city’s cathedral. Edward and Sophie will also view floral tributes in St Ann’s Square and the book of condolence at Manchester’s Central Library. Princess Anne and her husband Sir Timothy Laurence will visit Glasgow City Chambers to meet representatives of organisations of which the Queen was patron.

Announcements of the visits come as final preparations for the Queen’s funeral have been taking place in London where thousands of military personnel took part in a full rehearsal early this morning for the procession of Her Majesty’s coffin from Westminster Hall to Wellington Arch.

The rehearsal took place before sunrise and saw the State Gun Carriage, towed by almost 100 naval personnel and bearing a black coffin, travel from Westminster Hall to Westminster Abbey and then through central London.

Thousands of mourners continue to join the miles-long queue to pay their respects to the Queen as she lies in state at Westminster Hall.

Many queued overnight for the chance to file past the monarch’s coffin after it was handed to the care of the nation on Wednesday afternoon.

By 10am on Thursday, the queue was around three miles long and stretched past London Bridge to HMS Belfast.

The coffin, which sits on a catafalque and is draped with a Royal Standard, continues to be guarded at all hours by units from the Sovereign’s Bodyguard, the Household Division or Yeoman Warders of the Tower of London.

Driver £4,500 out of pocket for passing cyclist too closely says he was 4ft away