The simple act of compassion was captured by TV cameras as the Duke of Edinburgh’s Land Rover Defender hearse passed by the mourning family. Prince Philip’s daughter-in-law looked on with a heavy heart together with her two children, Lady Louise Windsor and James, Viscount Severn as the Duke took his final journey.

Although many eyes were focused on Prince William and Harry as they navigated the rift between them, the Countess had been pivotal to supporting the Royal Family.

As the hearse approached, cameras caught the Countess comforting her young son by sweetly placing her hand on his back.

The young viscount was the youngest attendee of the funeral at just 13 years old and is the youngest of the Duke’s grandchildren.

Sophie and her children bowed their heads in respect for Philip as the hearse passed. 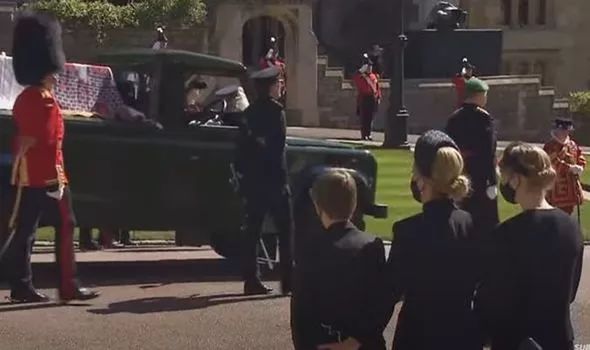 Sophie and her children then proceeded to the chapel to join Her Majesty as a minute’s silence was held in honour of the Duke’s life.

The children had reportedly become very close with the Queen and Philip as The Wessexes were regularly pictured at Windsor Castle.

Towards the end of the service Sophie was seen wiping away tears as she remembered the extraordinary life and service of the Duke.

The Countess has been a key figure supporting the Queen and has helped steer the Royal Family through the mourning period during last week.

The day after the announcement of Philip’s death on April 9, Sophie and her husband the Earl of Wessex were seen driving to Windsor castle to be with Her Majesty.

Speaking last week on the Duke’s passing, the Countess of Wessex said he died peacefully.

She said: “It was right for him. It was so gentle.

“It was just like somebody took him by the hand and off he went.”

She added it was “very, very peaceful and that’s all you want for somebody isn’t it?

“So, I think it’s so much easier for the person that goes than the people that are left behind.”