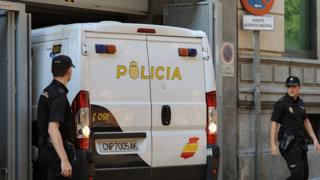 A Spanish mother is accused of conspiring with her daughter and the daughter’s boyfriend to murder her partner – and then reporting the plan to police.

Officers say the mother, 52, and daughter, 20, went to police to accuse the boyfriend of fraud, after he had failed to carry out the killing.

All three were arrested for the plot.

Police sources, quoted by Spanish media, say the plotters – all Spanish – signed a contract for the hit in March. But weeks passed, and finally the mother and daughter reported the boyfriend to police on 14 June.

The boyfriend, 29, had claimed to be in Spain’s CNI intelligence service, and had fake documents to that effect. Police say he had assured the mother and daughter that he could hire a colleague to carry out the hit.

In a further twist, the daughter alleged that her mother’s partner had defrauded them repeatedly, to the tune of €60,000 in total – the sum they hoped to get back by selling his organs.

The mother’s partner is reported to be safe and in good health.

Spain’s Efe news agency reports that among the boyfriend’s fake documents was a CV in which he claimed to be a lieutenant-colonel in the CNI, skilled with firearms and martial arts, trained in targeted killings and interrogations, and expert in foreign languages, including Bengali and Hawaiian.

The three do not have police records. But now the police are also checking to see if the boyfriend committed any previous fraud, posing as a CNI agent.