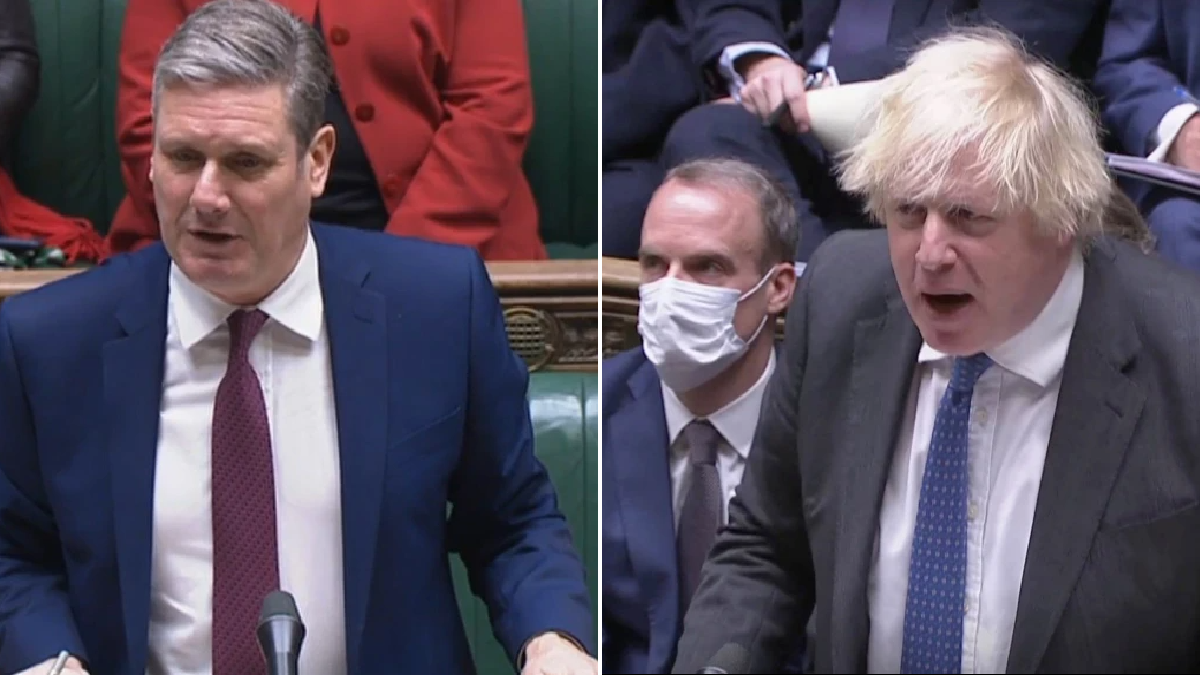 As Boris Johnson’s authority over his party and the country is questioned, the opposition leader has told him to ‘get his house in order’.

It was the biggest Tory rebellion since Johnson became PM, at a time when his credibility is already being scrutinised.

He continues to face questions over claims a Christmas party was held at his home in Downing Street during last year’s lockdown.

Sir Keir told the Commons the UK has the ‘worst possible Prime Minister at the worst possible time’, adding Boris Johnson is ‘too weak to lead’.

The Labour leader said: ‘The British public are looking for a Prime Minister with the trust and the authority to lead Britain through the crisis.

Addressing Tory heckles, he said: ‘They’re shouting now, where were they in the lobby last night?

‘His own MPs have had enough, they won’t defend him, they won’t turn up to support him and, if he proposes them, they won’t vote for basic public health measures.’

Sir Keir added: ‘The Prime Minister is so weak that without Labour votes last night, vital public health measures wouldn’t have got through.’

As Tories on the other side of the House shouted ‘that’s not true’, Sir Keir added: ‘He’s so socially distanced from the truth, he thinks that’s not true. I don’t know where to start.

‘We can’t go on with a Prime Minister who is too weak to lead. So will the Prime Minister take time this Christmas to look in the mirror and ask himself whether he has the trust and authority to lead this country?’

Despite a significant Tory rebellion, Parliament managed to pass legislation for mandatory proof of vaccination or a negative test for nightclubs and large events.

The Government also faced significant resistance to plans to make vaccination mandatory for NHS and social care staff from April next year. This passed by 385 votes to 100, with some Labour MPs also rebelling.

He asked: ‘Does the Prime Minister understand why his own MPs no longer trust him?

‘He comes to this House pompously claiming that he wants to rise above party politics and support the efforts of the nation in delivering the vaccine rollout, and then he talks endlessly about party politics and plays political games.’

The Labour leader said ‘the only person undermining public confidence is sitting right there’, gesturing to the Prime Minister.

Sir Keir added: ‘His MPs are wrong to vote against basic public health measures, but they are not wrong to distrust him.

‘Last week the Conservative member for the Forest of Dean asked why should people at home listening to the Prime Minister do things that people working in Downing Street are not prepared to do?’

He quoted a similar question from another Conservative backbencher, and Sir Keir then asked for the Prime Minister’s response.

Boris Johnson said: ‘The answer is very very clear and it’s there in what the public are doing, because they can see that the Government is getting on with delivering on their priorities, not just on the economy but above all on delivering the fastest booster rollout in Europe.

‘We’ve done almost double the percentage of any other European country, we’ve boosted 86% of the over-80s in this country, 91% of the those aged 75 to 79, that is an astonishing achievement, and I think that is what the people of this country are focused on rather than the partisan trivia that he continually raises.’

Sir Keir said he did not believe Boris Johnson was unaware ‘what was happening in his own house last Christmas’.

He added: ‘His MPs don’t believe him and nor do the British public. He’s taking the public for fools and it’s becoming dangerous because from today anyone who tests positive for coronavirus faces a second Christmas in isolation.

‘It’ll be heart-breaking for families across the country. The message from the Government has to be: “We know that following the rules won’t be easy this Christmas but it is necessary”.

‘Can the Prime Minister not see that he has no hope of regaining the moral authority to deliver that difficult message if he cannot be straight with the British public about the rule-breaking in Downing Street last Christmas?’

Johnson said he has repeatedly answered that question, adding: ‘He might explain why there are pictures of him quaffing beer.’

However, the Prime Minister did not elaborate on this allegation.

In April this year, Sir Keir came under fire for drinking a pint during an official visit to a brewery in North Wales while pubs remained shut under lockdown.

He poured himself a pint and was pictured taking a sip outside the premises. Takeaway alcoholic drinks were allowed under the rules at the time.

Royal fight: How costly could Prince Harry and Meghan fight for Sussex Royal brand be?