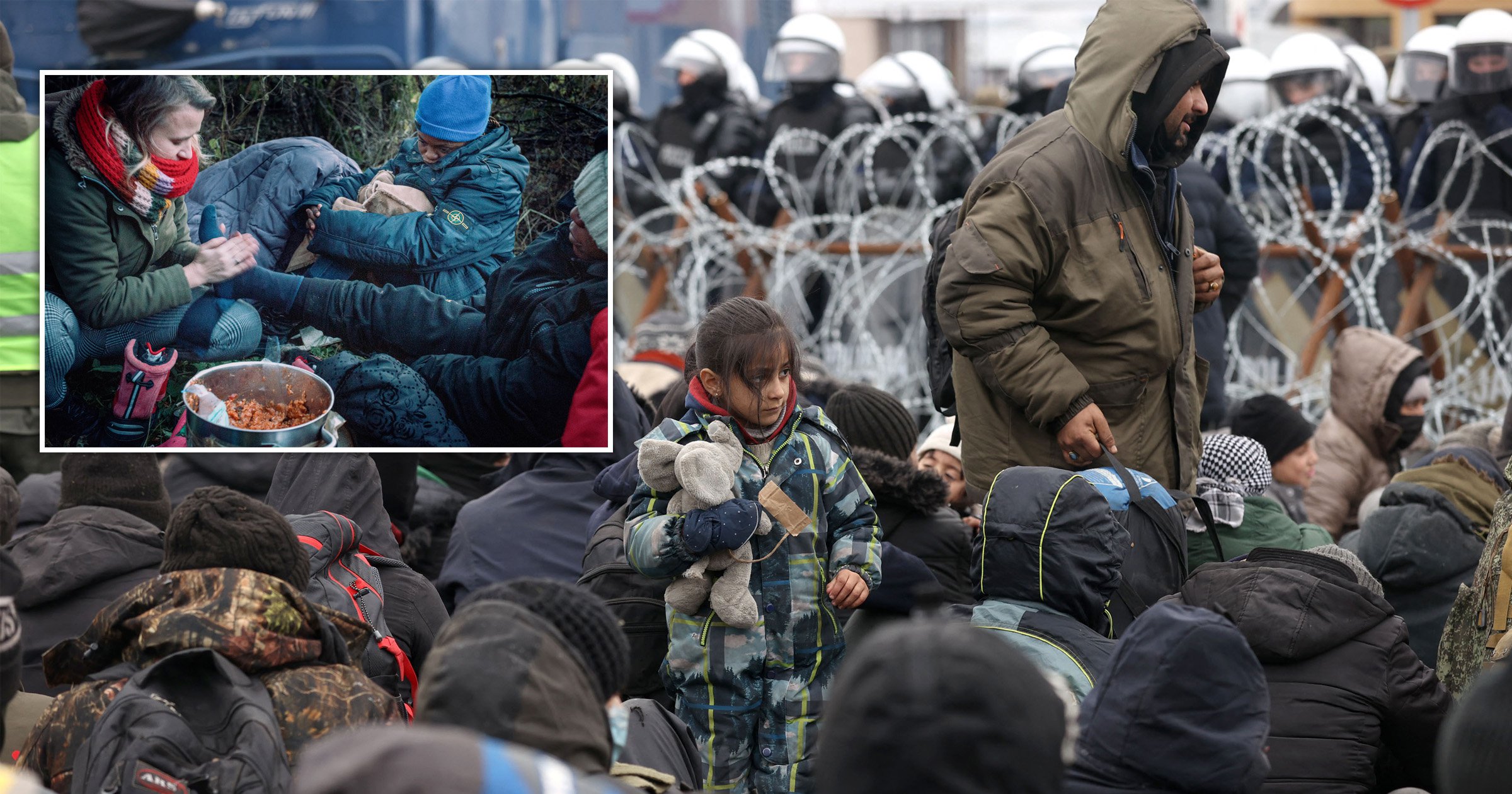 Migrants are being treated ‘like table tennis balls’ as the humanitarian situation on the border between Belarus and Poland deteriorates, an aid worker on the ground has said.

Anna Alboth described ‘heartbreaking’ scenes, with those stranded left in sub-zero temperatures between lines of dogs, guns and razor wire.

She spoke as tensions continued to rise at the flashpoint, where an estimated 2,000 migrants – including women with children – are camped just inside the border on the Belarusian side.

The activist, of Minority Rights Group International, said there have been 1,500 people on the Polish side alone who have come into contact with the NGO, but the current number in the zone, which she does not have full access to, is likely to be much higher.

The migrants are said to have become a political tool in the hands of Belarus, with its soldiers reportedly cutting holes in Polish border fences to herd large groups through.

The displaced people are alleged by the EU to have been lured to the frontier and encouraged to cross illegally into Europe by President Alexander Lukashenko’s authoritarian government.

Mrs Alboth, who is based in Poland, told Metro.co.uk that ‘push backs’ by both sides were resulting in injuries and suffering to the migrants, who are mainly from Iraq, Syria and Yemen, as the temperature drops with no resolution to the crisis in sight.

‘People are being treated like table tennis balls being thrown from one side to the other many times,’ she said.

‘Some people we are meeting in the forest are experiencing between five and 10 push backs, this is a very, very common thing.

‘They don’t get any food or water from either of the sides, which means they are hungry. It’s one thing to spend a night in the cold without food, it’s another to spend months like this and their immune systems are getting worse and worse. A month ago we were finding people were just tired, now most of them have signs of hypothermia.

‘Last night we found two men who couldn’t move or communicate any more. They are in hospital and hopefully they will survive but the state of people’s health is absolutely incomparable to what was happening before.

‘People are also getting hurt because they are being pushed through the fence, through the barbed wire, and are being left with scars.

‘On the Belarusian side they are being threatened with weapons and dogs. I have seen many signs of dog bites on the legs of adults and on kids.’

There have been reports of migrants being ‘weaponised’ with arms supplied by the Belarusians so they could break through at Kuznica, one of two main crossing points between the nations.

However, Mrs Alboth, whose group has been monitoring the situation since August, emphasised that many of those trapped are innocent women and children with no interest in violence.

She said: ‘You have to remember that a week ago when the migrants started to gather on the Belarusian side, they were all sure that Poland would open the border and that they would be able to peacefully apply for asylum.

‘There are a lot of families with many kids.

‘A few days ago I met a family of 16 with nine kids. Those are not people who would want to force the border. They have had enough of being pushed back and of being prisoners in the forest.

‘They were put on the army trucks and brought back to Belarus. People now know they will not be taken to a refugee camp so they are just hiding in the forest, trying to survive.’

The non-governmental organisation is part of the Poland-based Grupa Granica network of NGOs responding to the border crisis, which has claimed the lives of at least nine people so far.

The journalist has been involved in working on the EU borders for six years and never encountered scenes like those unfolding in the woods.

‘There is a high level of hunger and health problems,’ she said.

‘We as grass-roots activists cannot be the ones solving this problem, there should be big international humanitarian organisations on the spot giving food, water and structural help.

‘We are doing it because nobody else is doing it.

‘It’s just insane walking at night so the border controls don’t see us so we can bring hot soup and water to starving people. Have you ever seen people after five days of not eating? It’s something I have seen for the first time.

‘It’s just a shocking situation. We do what we can legally, we bring food, water and clothing but that’s all.

‘We have to leave the people in the forest, we are not allowed to transport them anywhere. This is what is heartbreaking for all of us, we see families with sick kids. We have to tell them sorry and leave them.’

EU officials have said they will widen sanctions existing against Belarus over what the bloc has described as an ‘illegal push of migrants’.

Along with NATO and the US, Brussels has accused Mr Lukashenko of channelling the displaced people towards his country’s border with Europe.

The sanctions were originally imposed in June following the arrest of Russian opposition activist Roman Protasevich on a Ryanair flight, but could now target anyone involved in trafficking through Belarus.

Minsk has denied encouraging illegal migration and accused Poland of breaking international law by pushing the migrants back over the frontier.

Johnson to call for unity at tense Nato summit