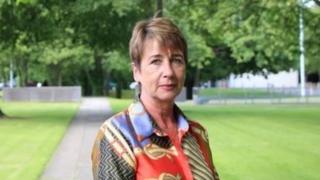 Ireland’s justice minister and head of police have apologised to a former officer who was investigated after she became pregnant by another recruit 34 years ago.

Majella Moynihan, then 22, faced a breach of discipline investigation in 1984, Irish national broadcaster RTÉ has reported.

She was also threatened with dismissal.

He said what had happened to Ms Moynihan was “clearly wrong on every level”.

Mr Harris said he apologised to Ms Moynihan on behalf of An Garda Síochána (Irish police) “for the manner in which she was treated and the subsequent lifelong impact this had on her”.

He has subsequently said he will meet Ms Moynihan and apologise to her in person. Garda headquarters said arrangements were being made to have the meeting as soon as possible.

Ms Moynihan had told RTÉ that she had not been contacted directly, by either the commissioner or the minister.

“I was happy with the apology, but I feel that the apology should have come to me first, a personal apology,” she said.

Her story was told by RTÉ’s Documentary on One. It was the first time she had spoken publicly about the incident.

Ms Moynihan was later charged with two counts under the 1971 Garda Síochána Regulations.

‘Would have been sacked’

The charges related to premarital sex and giving birth outside marriage.

She was not convicted after the Archbishop of Dublin advised the then Garda commissioner that such a conviction might encourage other officers to travel to the UK for abortions.

She told RTÉ she was made aware that she would have been sacked without this intervention.

She was summoned to a sworn hearing on the conduct of the recruit garda, the father of her child, where she had to testify about her sexual relationship with him and her sexual history.

After his birth, Ms Moynihan’s son was initially placed in foster care before being legally adopted in December 1984.

Ms Moynihan, who was unnamed by media reports at the time, said the experience has stayed with her.

“I can still remember that night that that statement was taken because I was shaking. Absolutely terrified,” she told RTÉ.

Ten years ago, she wrote to An Garda Síochána asking for a copy of the information they held on her because she “knew in (her) heart and soul” that an injustice had been done.