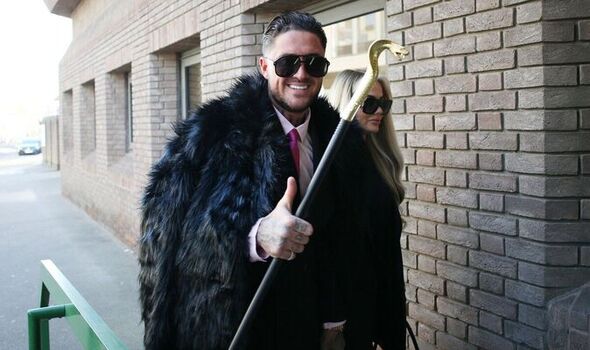 Giving evidence, Bear said he “thought it was funny” that the pair were captured on CCTV having sex.

He went on to claim the pair were “never in a relationship” labelling himself a “serial dater” but confessed to cheating on his girlfriend with Ms Harrison when they met filming the reality show ‘The Challenge’.

He told the court: “Me being me when there’s drink involved it just goes out the window.”

The self-confessed “Jack of all trades” told the court that he and Ms Harrison had a “fair old drink” on the day in question.

He told the court they had also had sex in the house before moving to the garden where the video was captured on CCTV.

Asked about the CCTV footage, Bear added: “Security first all day long, ever since the personal attack on my home, I didn’t like it.

“I have seven cameras, big gates, three dogs. Cameras are all around the house, outside the house, a few on the front, side back, and going from the front.”

Asked if he discussed the CCTV with Ms Harrison, he told the court: “Just so you know, when you go into my kitchen there’s a 30-inch monitor, all in one, no hidden rooms, a monitor set up with seven cameras.

He told the court he said to Ms Harrison: “You ain’t going to believe it babe, you want to see? I thought it was funny.”

Bear told the court: “She laughed, I’ll come and see it and we played it on the monitor screen.

“We watched it back and she asked for a copy of it, of course, I send her the copy, 20 mins long. She told me to delete the footage, and straightaway I did, no questions asked.”

Asked whether he intended to have sex that day, Bear told the court: “My intention that day was to catch up with a friend, having sex is a bonus, and being filmed was quite funny to watch back.”

Speaking about when he found out about the video, Bear told the court “personal attacks” on him were launched on Instagram, with people saying “really horrible things”.

He told the court he to “tried to protect” Ms Harrison by saying it wasn’t her in the video.

The defendant replied: “She was never my girlfriend, Georgia Harrison.”

Asked by Ms Carey if he put in a “good performance” in the sex video, Bear said: “I put in my best performance every time I have sex with the ladies.”

He added: “Twenty minutes – I wasn’t going to be rubbish.

“I wasn’t a three-minute wonder.”

Throughout the trial, Bear denied sharing the video, asked if he sent the video to anyone via WhatsApp he said it was a “complete lie” later adding that it was “make-believe” that it was ever uploaded.

He argued with the prosecutor suggesting their case was “guesswork”, adding: “You’d better move on as you’re starting to look a bit silly.

“When you’ve only got a little window to speak, when you’re sitting at the back letting your life unfold, nearly lost my house because of this, that’s what no one else sees. I’ve got all day.”

Boris to urge public to accept four-week delay to freedom