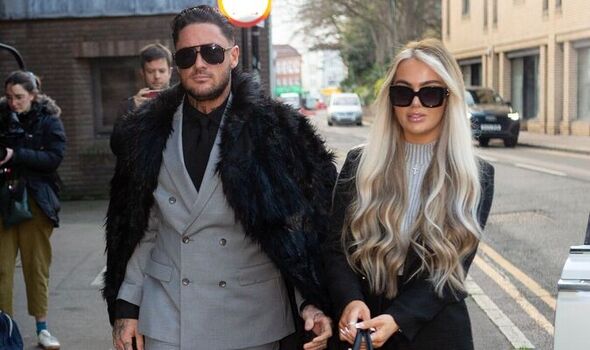 Giving evidence at Chelmsford Crown Court, Ms Harrison spoke of the “shame” she felt adding that the events left her “in the worst state of my life”.

Appearing behind a screen, Ms Harrison denied “exaggerating and embellishing” her account to “get Bear nicked”.

She said: “I couldn’t leave my room. Instead of explaining, he put his subscription fee up. My brother and sister had to see me having sex on his account.

“Whether he did it or not – that’s no way to act if that video is mistakenly on your account. It’s brazen.”

She added: “I’m hurt, I’m upset, I’m ashamed and I deserve justice for what I have been through and he deserves consequences.”

She told the court that he orignially thought it was a “mistake” as she didn’t think Bear would be “monetisiting it”.

Ms Harrison replied: “I am using those words because I am 100 percent confident that’s what it is. I wanted to make clear to Stephen Bear what would happen if he sent those videos.

“It upset me. It ruined my life. I thought he had respect for me. There was a time when I really did love him and he took me around saying he respected me, he loved me, and at the time I thought he had a promising career on television and he would not do what he did.

“But looking back, I was an absolute idiot.”

On the night in question, Ms Harrison said she went to Bear’s house in Loughton, Essex, where the pair ended up drinking throughout the day and eating lunch at a local Turkish restaurant.

They then returned to Bear’s home where they “chatted, had a laugh, and drank tequila shots and wine”.

She told the court she had “absolutely no idea” he had CCTV until he mentioned it later.

Cocaine worth £184m found hidden in banana shipment from Colombia