Theresa May’s failed to win support for her withdrawal agreement again on Friday afternoon as it was rejected by 344 votes to 286. Deputy chairman of the European Research Group (ERG) Steve Baker voted against Mrs May’s deal and admitted to the entire process being “torture” because he and other Brexiteers Conservatives know the deal is “rotten”. The former Brexit minister was interviewed by BBC’s Vicki Young before his outburst and opened by saying: “I will say as late as last night I was still wrestling whether I should vote it in case we would lose Brexit.

“Jacob Rees-Mogg has made a case articulately and cogently but in the end, I decided I had to side with the DUP on the issue and in the end, I just couldn’t put my name to the backstop and so I voted against it.

“Now it is all about choices and what we really would prefer do is correct the flaws in the backstop and then we could find a way to support it.

The BBC interviewer then pushed to see how Mr Baker felt about the notion that he and other Leave supporters had been campaigning for Brexit for years, if not decades, and may have now “thrown it all away” by voting down Theresa May’s Brexit plan.

The Brexiteer MP quickly retorted: “If only that thesis was true. 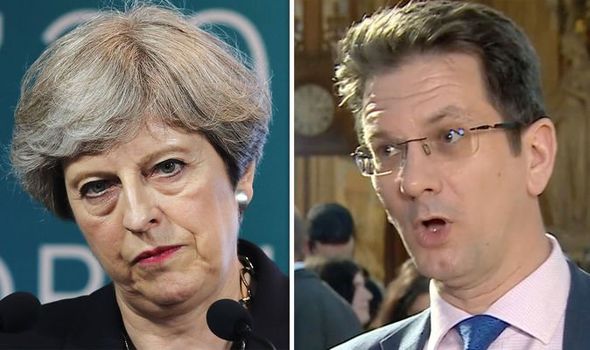 “If that was true we would have voted for the deal and we would be leaving successfully.

“The problem is that the deal is rotten, it stinks and it triple locks us into the institution of the EU particularly if the political declaration had been carried through.

“That is why overwhelmingly it has been the eurosceptic Conservatives who have been opposing it.

“When Remain colleagues are telling you, you need to vote for the deal maybe you should start picking up this is not a good deal.

“I’ve had people here congratulating me and thanking me, normal voters who are thankful we didn’t vote for the deal because they know it stinks.”

Mr Baker then explained how difficult it has been on making crucial Brexit decisions in Parliament.

He closed by saying: “It has been absolute torture for everybody.

“I mean it has just been awful, we have been deliberately placed in a bind.

“Number 10 said they were going to ask us to vote as many times as necessary to get it through.

“It was always going to be a war of attrition but my goodness they do know what they are doing.”

After Theresa May’s defeat, Mr Baker also said it was time for Mrs May to quit.

He said: “This must be the final defeat for Theresa May’s Deal. It’s finished. And we must move on.

“It has not passed. It will not pass. I regret to say it is time for Theresa May to follow through on her words and make way so that a new leader can deliver a Withdrawal Agreement which will be passed by Parliament.

“This has been a tragic waste of time and energy for the country. We can waste no more.”